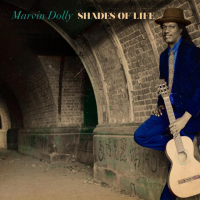 There is a common trait among musicians with Caribbean heritage that their music has an undulating rhythm akin to the ocean currents that prevail in the region. Born on the island of Trinidad and Tobago, guitarist Marvin Dolly has that inherent native quality, and weaves it into a personal articulation executed with a mellow yet determined technique on his instrument. Taking to the guitar at a young age, Dolly was drawn to the intricate chord configuration approach of Trinidad guitar hero Fitzroy Coleman, with whom he was able to get first hand instruction and advice. His guitar has taken him far from his Caribbean roots, and Shades Of Life is his recording debut as leader.

The yearning for home and family is one of the focal points in Dolly's compositions. The loss of his mother is reflected in "Farewell Dance," where he is joined by trumpeter Etienne Charles, who is also from Trinidad, and bassist Jonathan Michel. Performed in a fluctuating 6/8 tempo the muted trumpet sets up Dollys' light-fingered runs, deftly playing his own melodic backing, before opening a space for the bass. In homage to his hometown back in Trinidad, "Barataria," is post-bop shaded blues, featuring JS Williams on trumpet, and John Gray on bass. These two are the players on the rest of the repertoire, and are both tuned into the same wavelength.

Caressing island rhythms are the foundation for the title track and "The Love I Yearn," the latter penned by trumpeter Williams, who plays an animated horn around a samba infused time signature. "Roses For You," reprises the trumpet up front on an uplifting song written for all mothers everywhere. Dolly's ability at appropriate chordal selection and implementation is essential to all the numbers, as he is the sole accompaniment for the horn to improvise on.

He is entirely on his own on "Calypsonian Dream," displaying the clever guitar work that has identified this ethnic music of his homeland. Though strongly identified with the steel pans (drums) of the carnivals, it has been the guitar which has been the instrument of choice for many Trinidad based calypso artists. Guitarist Freddie Bryant joins Dolly on the closing guitar duet "Short Letters To Mother," as they encounter each other in a friendly exchange, celebrating those who gave us life. Bryant brings his world music experience into the mix, making for an engaging melodic and harmonic six string feast.

Marvin Dolly has become sought after on an international level, for he is the perfect accompanist who can also put on an impressive solo recital. His recent filmed network episodes with popular chanteuse ALA.NI went viral, and his trio combo is off on another tour through Europe His mastery of jazz infused guitar graced with esthetic subtleties has caught the ears of those in the know who appreciate him both as a first call sideman and bandleader. The word on Marvin Dolly is that there is a lot more music inside him that is bound to come out.

Farewell Dance; Barataria; Shades Of Life; Strait Of Rhodes; the Love I yearn; Roses For You; Calypsonian Dream; Short Letters To Mother.