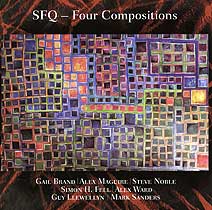 Over the past twenty years, bassist Simon H. Fell has segmented his work between writing large scale compositions for massive orchestras of horns, strings, brass, percussion and playing bass as part of turbulent improv combos—usually in trios with a saxophonist and drummer.

Four Compositions, a two-CD set, appears to be an almost wholly successful attempt to reconcile the formal and audacious parts of his musically schizophrenic personality. As a matter-of-fact, while the first disc, subtitled "Three Quintets" shows how far he has evolved in creating for his by thenestablished quintet, "Liverpool Quartet," for an even smaller group confirms that accomplished creations can result from an even more relaxed milieu first time out.

Most impressive is the work of French hornist Guy Llewellyn. A specialist in contemporary classical performance, he brings the flexibility and colors of a slide trombone to his work here. Sharing the front line is clarinetist Alex Ward, who is also featured on the other disc. Drummer Mark Sanders is first call for many Britimprov situations, in combos or as part of the band Lunge, with trombonist Gail Brand, who also plays on the first CD.

Oddly enough, while Fell in the notes maintains that the pieces written for the concert in Liverpool captured on the second CD, reflect a move away from jazz to connect with contemporary classical and experimental music, some of the tracks appear more overtly jazzy than the pieces on disc one. Especially obvious is the transparently titled "GM2 Blues" which floats on a Mingusaian bass line from its composer. Ward's high-pitched trilling often in harmony with curt, mellow horn lines, only adds to this, as do Sanders' snare drum and percussion accents. Most audible here than anywhere else, Fell contributes pedal point action to fling the piece forward.

Notwithstanding sequenced fluttering from Sander's electronics, this jazz/improv disposition remains throughout the second two-thirds of the disc in pieces like "Quartet" and "Liverpool 2." The latter features reverberations distorting bass drum pedal pressure and hi-hat volleys with doorstopper resonation. Yet these and subsequent polyrhythmic snaps and taps from rims and cymbals conform easily with the others' output. Ward shrills chirped notes, Llewellyn's thunderous lower-pitched one and Fell's ponticello sweeps fit it all together. Finally, there's a coda of mewling smears from the clarinet, lip-buzzing police siren obbligatos from the horn and the drummer melds the textures with nearly weightless pings on his cymbals, likely produced by striking with the telescoped wire strands of brush handles.

His working group up until then, the quintet featured on "Three Quintets" intensifies the favorable impression it had already made with Thirteen Rectangles. Ward is present, along with trombonist Brand and Noble. A prime addition is Alex Maguire, a longtime mate of Noble's.

"Gruppen Modulor 2" in five sections, is the core of this performance, with Fell likening this "nearer to modern jazz," 24-minute plus composition influenced by Stockhausen, George Russell and architect Le Corbusier. Architecturally, this sound edifice seems to have been reconfigured out of many already existing structures. Beginning in the house of jazz, the first few minutes are vaguely reminiscent of Mingus' "Boogie Stop Shuffle" with walking bass, extended flams and snare beats from the drums and carefully voiced, unison horn slurs and trills. As the clarinetist double tongues in the altissimo register, pedal pressure emphasis from the piano and metronomelike time keeping from percussion keep things on an even keel.

Putting aside rhetoric, these five and four-person aggregations appear to give composer Fell the perfect vehicles for his neither-fish-nor-fowl compositions that call on more than the jazz and improv traditions. On these CDs of exhilarating writing and performance, the quartet has a slight edge. Secondly, it also wets the appetite for further large-scale works from Fell.