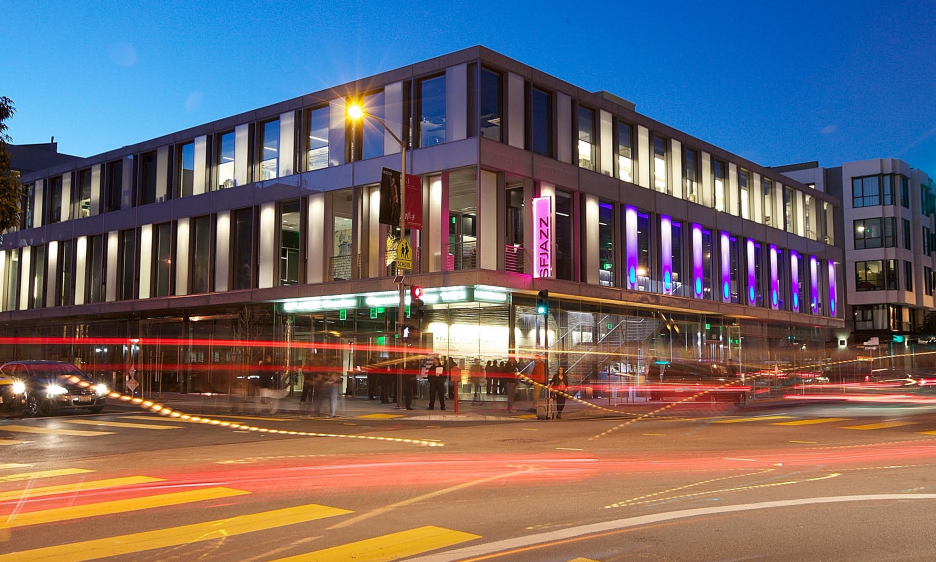 By ARTHUR R GEORGE
July 19, 2018
Sign in to view read count
Five years after the San Francisco, California organization SFJAZZ created its own building, the SFJAZZ Center, it has proved a raving, even rampaging, success, unrelenting in programming, sales, education, and music production. Its number of concerts has doubled from 248 to more than 500. Its membership has increased by almost 200% to more than 14,000. It moves a million dollars worth of tickets in the first week its box office opens; some shows sell out to members even before the general public can line up, an incentive to join.

It commits to bringing music programs to every middle school in San Francisco and Oakland, has family-friendly matinee performances, in-house digital production classes, a high school all-star band, subsidized tickets for community and school organizations. Positioned just blocks behind San Francisco's prestigious ballet, opera, and symphony, SFJAZZ inserted itself near these cultural pantheons but with an intent to be more grounded in its urban zone. The site it occupies not long ago were auto repair and muffler shops.

The center yields not an inch from its surrounding sidewalk. There's no setback, no distance, no elevated pedestal off the sidewalk, unlike the imposing entrances to many cultural edifices. Glass walls span three sides and wrap two corners; separation between inside and outside dissolves. The building, at the intersection of Franklin and Fell Streets, is transparent, immediately present. "We wanted to lock it into the street," architect Mark Cavagnero told Architectural Record magazine. There could not have been a tighter placement.

After starting in 1983 and playing to a variety of locations around San Francisco, the difference for success, according to founder and executive artistic director Randall Kline, has been in having a home to call its own. Its concert season runs from September to May, followed by a festival for two weeks in June and then a Summer Session from mid-July to late August before it all resets with new shows for the next regular season.

"There's an 'SFJAZZ' experience now," Kline explains. "Here, we're in a building that was designed from the ground up for the purpose of presenting jazz: lighting, sound, staging, hospitality, not borrowed space elsewhere." The size of the main auditorium, 700 seats, has an economic efficiency. If smaller, revenues would be insufficient; if larger, it would lose intimacy, seats would go unsold even in a supportive market, and empty spaces lack buzz. Now, Kline says, across all seasons, ninety per cent of his seats are sold, and there's a vitality apparent.

The repeated mantra about the Jazz Center is "first free-standing" or "first stand-alone." It takes that solo by being the first separate free-standing or stand-alone structure in the United States built specifically for jazz. That accomplishment distinguishes this West Coast facility from Jazz at Lincoln Center in New York, also expressly built for jazz but enclosed within a commercial high-rise. Not coincidentally, as each sought the finest, the acoustics of both places were designed by Sam Berkow of SIA Acoustics, in New York and Los Angeles.

SFJAZZ has a grand entrance, but it is inside the building. One walks directly onto the concert floor from the lobby, or goes up a staircase before dropping down into a cube that surrounds the stage on three sides, or onto a terrace behind and above the performers. None of the 700 seats, rising as steeply as building codes permit, is more than 75 feet from the stage. Performers look directly at listeners, not out over their heads. The audience is not fixed in a forward gaze, but look across and around at each other. A window off the lobby lounge peeks into the main hall, visible straight through from the street outside, like a knothole in the fence of an old baseball park, connecting to the neighborhood.

At another corner of the building is the 100-seat Joe Henderson Sound Lab, about the size of a small club, with floor to ceiling windows also directly to the street. The room presents mostly emergent talent, but not always: Cyrus Chestnut (piano) will be in the space with Buster Williams (bass) and Lenny White (drums) in September.

Five years after its construction, SFJAZZ seeks to be, and is, a place of engagement. This jazz temple, for music that is worldly but held sacred, sought the intimacy of a club but derived its design largely from churches. Randall Kline and architect Cavagnero visited a variety of jazz performance spaces, from clubs to classic concert halls to dive bars. They asked musicians what best suited them. The answers ranged up to a Roman amphitheater, uniformly purposed for connection with the audience.

As a student of architecture, Cavagnero had been inspired by church sanctuaries as meeting places in Frank Lloyd Wright's Unity Temple outside Chicago and Louis Kahn's First Unitarian in Rochester, New York. Both Kline and Cavagnero are originally from New England; major inspiration also came in Boston's Old South Meeting House, built for Puritans and where colonists met leading to the American Revolution.

What captivated Kline and Cavagnero was how the environments brought people together. They all have the common element of a bright open internal space with seating elevated on three sides rather than exclusively in rows facing forward. The buildings span almost 300 years: the Meeting House from 1729, Wright's early modernism at the beginning of the 20th century, Kahn just after mid-century, and SFJAZZ at the 21st.

Wright had a theology uniting all beings. Kahn considered the sanctuary as a place for centering a journey. Around the sides, he situated classrooms as places for inquiry, instruction, and discovery. SFJAZZ applies that unto the music. Classrooms, rehearsal spaces, digital labs for music production, and offices surround its perimeter, similarly converging musical thought in the continuing discovery of jazz.

The main space, Miner Auditorium, is 80 feet on a side and 40 feet deep, the same spatial ratio divisible by two of 60 feet square and 30 feet high that Wright used. The depth creates that desired amphitheater, and the interior cube carries much of the structural load for the rest of the building, enabling the exterior glass sheathing. Wright in Oak Park used the same principle.

SFJAZZ showcases what jazz is and challenges those who would say what it is not. The SFJAZZ Center bends the map to explore the paths and roots of jazz. It draws in and seeks out international currents, particularly from elsewhere in the Americas and across the globe. It seeks out any musical style and improvisational music either influenced by jazz or which has influenced jazz.

Programming has a strong "Spanish tinge," fundamental historically as early as Jelly Roll Morton's New Orleans incorporation of Afro-Cuban rhythms, but reaches far beyond. Spanish takes in the Caribbean, Puerto Rico, Haiti, even Mexico with its eastern shore on the same Gulf that washes over Cuba, and the other countries of Latin America. Tracing the source back to Africa also charts how it spread. "Regular jazz," as in a "standard" keyboard, horn, rhythm combo, is just one of the styles presented, but even that in extraordinary manifestations.

Like cutting a gem, SFJAZZ presents not only different facets of jazz, but also different aspects of individual performers in different settings. The music is taken apart and perceived from different angles. In November, pianist Kenny Barron will appear in four different iterations: solo; in separate duets with violinist Regina Carter, drummer Terri Lyne Carrington, and trumpeter Eddie Henderson; in a quintet expanded from his standard trio; and in a quartet comprised of himself and three women, including his granddaughter.

Cuban pianists Chucho Valdes and Gonzalo Rubalcaba appear together in August. In February, Valdés appears for three nights with his Afro-Cuban band Irakere 45. In March, he returns on a Saturday night in a duo with Joe Lovano, which brackets other Lovano combinations. The saxophonist opens on a Thursday night with a nine-piece band; on Friday, he's in a double bill with two different trio combinations, Bill Frisell on guitar and Tyshawn Sorey on drums, Marilyn Crispell on piano and Carmen Castaldi on drums. On Sunday Lovano convenes with two other tenor saxophones, Joshua Redman and Ravi Coltrane. A month later, he returns as part of the Spring Quartet with drummer Jack DeJohnette, bassist Esperanza Spalding, and Argentine pianist Leo Genovese.

Pianist Eliane Elias will have three different presentations over four nights: first, music from the 1964 Broadway hit "Man of La Mancha" imparted as samba; next, an anthology of her own works, and then two nights of other songs from her native Brazil. Two past members of the Carolina Chocolate Drops appear separately on different nights in February: singer / guitarist Hubby Jenkins with string music of the rural south; multi-instrumentalist and singer Leyla McCalla explores her journey from New York to Africa to New Orleans where she re-connected to her Haitian heritage.

Valdés, Lovano, Diane Reeves, Laurie Anderson, and Marcus Shelby are among Resident Artistic Directors retained over the course of two-year terms to curate dream programming. Reeves features the music of Brazil. Anderson imagines a session of aural feedback from the guitars of her late husband [[m: Lou Reed}}. Shelby's orchestrations examine blues, baseball of the "Negro leagues," and the big band of [[m: Duke Ellington}}.

Continuing in the independent spirit of its building, the [[m: SFJAZZ Collective}} is a keynote group of eight musicians, many of whom lead their own groups or are sidemen of significance. They assemble each year under a single banner to re-examine the work of a major artist ranging from Miles Davis, John Coltrane, McCoy Tyner to Michael Jackson and Stevie Wonder. Each member of the Collective writes a fresh arrangement of something by the selected master, and each a newly commissioned piece for performance by the Collective; sixteen new works a year.

The Collective's annual format pays tribute to the past while committing to developing the art form. Each incarnation of the Collective convenes for three weeks each spring to develop its new material, for performance over only four days in the autumn before leaving on national and international tours.