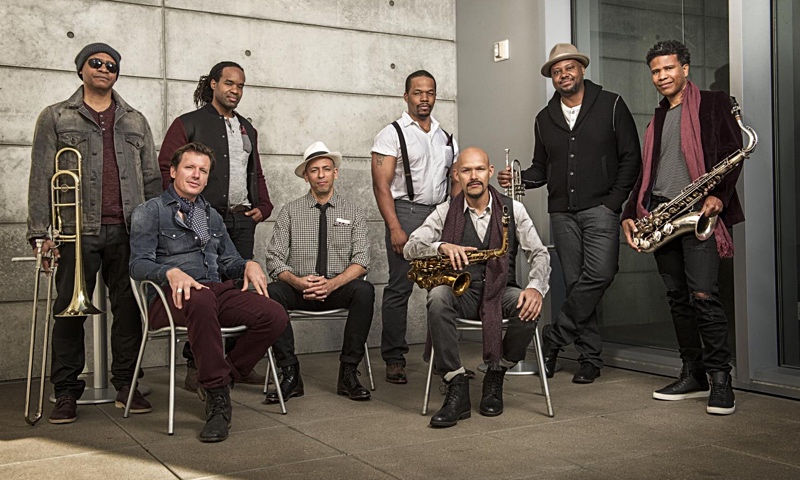 Miles was the first jazz music I ever heard… It changed the trajectory of my life. —Sean Jones

The SFJAZZ Collective has been operating since 2004. In the beginning, it may have seemed to some as just another all-star collection of musicians who strut their stuff for a while, then go about their own business. It has shown over time it is much different.

The format—eight outstanding musicians banding together to play the music of jazz icons, works hard at what the band was designed for: a leaderless, democratic group where musicians write arrangements that re-imagine works of the particular artist selected each year as the tribute showcase for the tour. They must also write and arrange a new piece each season. The band has a reputation as one of the fine touring groups. Some of the members, like founding member Joshua Redman and saxophonist Joe Lovano moved on after awhile. But they were replaced by some of the finest individual players on the scene. And through a lot of serious work, they meld together.

Each year, the band records a live CD that documents their outstanding concerts. People selected in the past to be the subject of the annual tribute include John Coltrane, Herbie Hancock, Thelonious Monk, Wayne Shorter, Stevie Wonder and Chick Corea, among others. The new CD, released in March, is SFJAZZ Collective: Music of Miles Davis & Original Compositions, Live: SFJAZZ Center 2016. It was recorded live in 2016 at the SFJAZZ Collective's home base, the SFJAZZ Center in San Francisco. The two-disc album features new arrangements of the classic works composed by and associated with Miles Davis and new original compositions by collective members.

Each arrangement on the Miles side brings fresh interesting takes on the music. The solos are universally excellent. The band is tight. It bears repeated listening.

Davis' music includes "So What," "Milestones," "Nardis," "Bitches Brew," "Tutu" and more. The original tunes and arrangements don't take a back seat. They are engaging and present different approaches and textures because each springs from a different member of the band.

With the spring tour essentially done, All About Jazz spoke to trumpeter Jones and saxman Zenón to talk about the group.

Born and raised in San Juan, Puerto Rico, Zenón is seen as one of the bright young talents, as a writer and player. He has nine recordings as a leader, including the Grammy-nominated Identities are Changeable. Earlier this year he released Tipico. As a sideman he has worked with jazz luminaries such as Charlie Haden, Danilo Perez, Fred Hersch and Steve Coleman.

Jones, an impassioned player with monster chops, tours regularly with his own ensembles and has seven recordings as a leader. He's played with a list of great jazzmen and spent some time with the Jazz at Lincoln Center orchestra. He is also a renowned teacher and has taught at Duquesne University, Oberlin Conservatory and Berklee College of Music. He serves as artistic director of both the Pittsburgh and Cleveland Jazz Orchestras.

All About Jazz: What do you like about the SFJAZZ organization?

Sean Jones: The best thing about being in the band is there is no leader. We all contribute equally to the sound of the band. We're all responsible for two pieces each season. It's special for me, because I enjoy being a sideman, but I don't like being a sideman with the idea in mind that I don't have a say in what's going on. This is kind of the best situation for me. I get to be a leader in the band. But at the same time I can play other folks' music and learn how they conduct themselves as leaders. So it's really fun, man."

Miguel Zenon: I've been with the band since the first year. There's a couple things about the group that make it really unique, especially in today's jazz world—we don't have an official band leader. It's great because we all take turns doing that, depending on the situation. We take everything to a vote. We make all the decisions collectively. Also we get to write a lot of music for the band and get a long time to work on that music, to rehearse it. So it opens the door to experiment and things, in terms of difficulty, that probably wouldn't happen in other circumstances.

AAJ: Must be fun to play in a band with these excellent musicians.

Jones: The other thing that's great is we actually have a pretty large amount of time to put the music together. Every fall we get together and rehearse for basically two and a half weeks. We play six to eight hours a day. You can really get tight in that amount of time.

AAJ: There's something to learn from everyone.

Jones: Everybody has something different that they bring to the table. Some people are really meticulous about what they want. Other people, like me, are kind of loose. I like to lead by corralling different ideas together and putting them into a concise thought. It's really nice.

Zenon: Something like this you can only take things from it. It's been an amazing experience for me, that's for sure.

AAJ: How much of a challenge is it for each of you to come up with tunes that you need for that season?

Zenon: Once you get in the flow of how the band works, you get used to the players and how it works in terms of the rehearsal period. We make the decisions collectively, so we even choose the composers we're going to focus on. Next year, people can choose their tunes, first-come, first-served basis. It usually flows pretty seamlessly.

Jones: I really enjoy that. And I know the cats can play whatever I write, so that's really nice.

AAJ: It's gotta be nice playing other people's charts as well.

Zenon: For me that's the greatest thing about it. It's great to bring your own music and get it played by such a high level of musicianship. But for me, I've always enjoyed playing with other people. That's kind of why I got into this in the first place. It's great to play with so many wonderful musicians, get to play their music and learn about their personalities, their concepts and approaches.

AAJ:This tour features the music of Miles Davis. Does that have extra significance for you, Sean, as a trumpet player?

Jones: Of course. Since I left Jazz at Lincoln Center, I've kind of found myself in many Miles tribute scenarios. The first one was with Marcus Miller's Tutu Revisited tour. After that, Terrence Blanchard and I did a tribute to Miles and his collaboration with Gil Evans. We did that a few times. Then I went on the road with Marcus Miller, Herbie and Wayne and I did another tribute. Now here I am with the Collective doing Miles.

Miles was the first jazz music I ever heard. In sixth grade my teacher gave me the record Kind of Blue and he also gave me Tutu. When I heard that, it kind of changed the trajectory of my life. Although I was pretty young. I was kind of a nerd. [chuckles] My folks wanted me to go into medicine or something like that. But Miles got me. I don't regret it.

Zenon: He's one of the great figures of this music, or any music really. He's one of the first musicians that attracted me to jazz in the first place. When I started getting into the music, it was his records that made me fall in love with jazz. So it's great to explore it. He's such a seminal figure, not only as an instrumentalist, but as a conceptualist, as a leader, as a composer. He dictated the direction of this music for many, many decades.

Jones: Also, as a leader I really like the idea that he chose people to be themselves. His band changed because he allowed musicians in the band to kind of put their own vision forward. That's what I like to do as a leader.

Jones:It was a lot of fun. It was challenging, man, because if you do too much with it, it kind of takes away from what the tone is. The tune is pretty simple, and it wants to be simple. So what I tried to do is celebrate the answer to the bass line a little bit more than the bass line. The bass line is still there, but it's disrupted by the punches. I also took choruses of Miles' solo and created solos for the band. It was a lot of fun.

AAJ: You also did "Hutcherson's Hug."

Jones: I didn't have the opportunity to play in the Collective with Bobby Hutcherson, but one of my favorite stories is that he liked to start every rehearsal off by hugging people. So I thought that was cool. He wanted the spirit in the room to be right. I decided to write a piece based on that hug. It features Warren Wolf on the vibes.

Jones: [To Zenon] You arranged "Nardis." what was that process like?

Zenon: Once I pick a tune, I pick if for a reason. In this case when it came time to arrange the piece I was really into music from places in eastern Europe, especially the Balkans. Almost like gypsy music in a way. Bulgaria. Czech Republic. Places like that. I was checking out a lot of music that had this non-Western element to the melodies. "Nardis" is already embedded in the tune. It kind of called out to me. It kind of flowed in an organic way. I made it fit into what I was working with at the time. I was transcribing a lot of this music, getting into a lot of the phrases and the scales. I just put "Nardis" through the filter of all that folkloric music from those regions, to try to get something that made sense.

AAJ: And you wrote and arranged "Tribe."

Zenon: The arrangement process was very similar [with "Nardis"]. You're a couple steps ahead. You're starting with a tune that already exists. When you have an original, you have to come with a seed and then make that grow into a full tune. I've been doing this for a few years now, writing music that is very specifically written for this band. It grew out of this strong rhythmic idea that proceeds from the drum set and has a tribal feel to it. I made the whole tune grow out of that. A short rhythmic cell that finds itself repeated and reprised throughout the composition. I built it up that way.