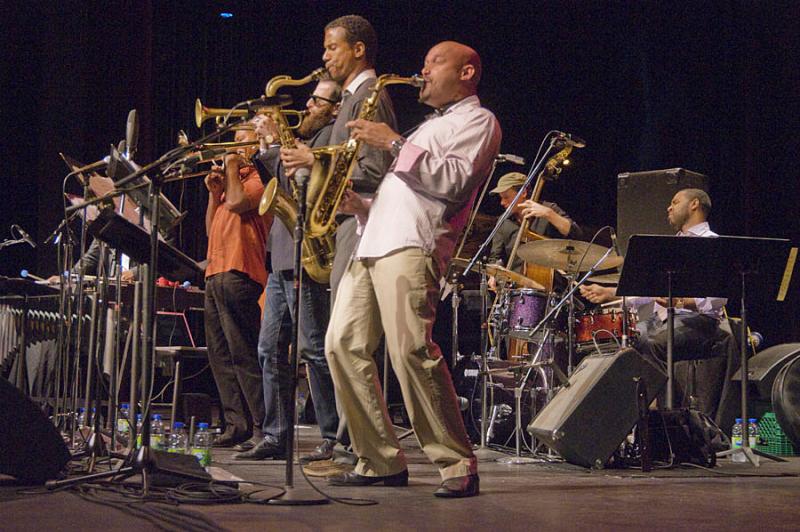 In its eight-year existence, the SFJAZZ Collective has gone from triumph to triumph, each year choosing a specific artist to honor—past years including pianist Herbie Hancock and saxophonists Ornette Coleman, John Coltrane and Wayne Shorter—and giving each of its eight members the mandate of coming up with a new arrangement and a new composition, making the Collective the best kind of jazz laboratory; one where the heroes of the past are celebrated alongside these relatively young icons in the making.

The 2011 edition of this gradually changing collective—only alto saxophonist Miguel Zenon remains from the inaugural 2004 season—paid tribute, for the first time, to an artist outside (though certainly informed by) the jazz purview, Stevie Wonder. The source music for the Collective's return to Ottawa on October 13, 2011 may have been distanced considerably from its 2009 Ottawa performance—when a substantially different lineup performed its homage to McCoy Tyner—but the below-capacity but enthusiastic crowd at Centrepoint Theatre would have been hard-pressed to tell the difference.

That's because this was no get-down, shake-your-booty look at the music of Stevie Wonder, though there were grooves aplenty—delivered, this time, by drummer Kendrick Scott, who was substituting for regular drummer Eric Harland on eight of the fall tour's thirteen US and Canada dates. But if the coda to trumpeter Avishai Cohen - Trumpet's radical reinvention of "Sir Duke" was enough to get everyone in the audience's heads bopping, it's a fair bet most of them didn't even notice the extra beat being tagged onto every fourth bar, or how it seemed to magically interlock when the horns began playing the familiar chorus ("You can feel it all over...") over top of it, in straight time. And for those already familiar with the new tunes and arrangements on the Collective's recently released Live in New York Season 8: Music of Stevie Wonder (SFJAZZ, 2011), it was clear that the music was a living, breathing, evolving thing, as vibraphonist Stefon Harris playfully stretched and contracted the time of another of the song's familiar themes, keeping the rest of the Collective on its toes.

This incarnation of SFJAZZ Collective represents the first time that there's been no change in the lineup since the previous year, when it paid tribute to pianist Horace Silver, documented on Live 2010: 7th Annual Concert (SFJAZZ, 2010). A consistent lineup may mean more opportunity to hone its chemistry, but the Collective has always managed change well; with its lineup changing gradually, year-after-year, there was always some residual chemistry while achieving, at the same time, the best possible sound of surprise, from the introduction of someone new to the mix. 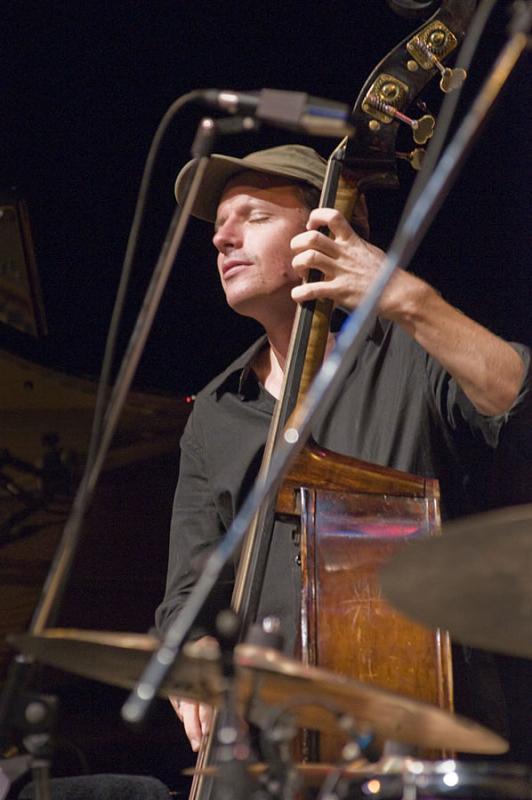 This may have only been Scott's second date, but he nailed it from the get-go, while bringing a different kind of energy to the music that changed the complexion of the Collective. This isn't the first time he's followed in Harland's footsteps, either—replacing the barely-older drummer in trumpeter Terence Blanchard's band at the time of Flow (Blue Note, 2005)—but if that suggests Scott's some kind of second-stringer, waiting in the wings like an actor's stand-in, nothing could be further from the truth, on the basis of the 31-year-old's leader debut, The Source (Word Culture Music, 2007), and subsequent work with trumpeter Sean Jones, saxophonist Myron Walden and singer Gretchen Parlato.

If Scott was the fire in the engine room, then bassist Matt Penman was the engineer keeping that fire stoked. A masterful player, he held down the shifting landscape of Zenon's second set-closing arrangement of Wonder's "Superstition," which deconstructed the tune down to its fundamental motifs, rebuilding them in various permutations and combinations, for a reading as fiery as it was cerebral. Penman's unshakable time was balanced by thoughtful solos, in particular his pizzicato work on tenor saxophonist Mark Turner's "Orpheus," a heady composition that created a variety of contexts for inspired free play that gradually coalesced into a form only truly revealed at its conclusion. 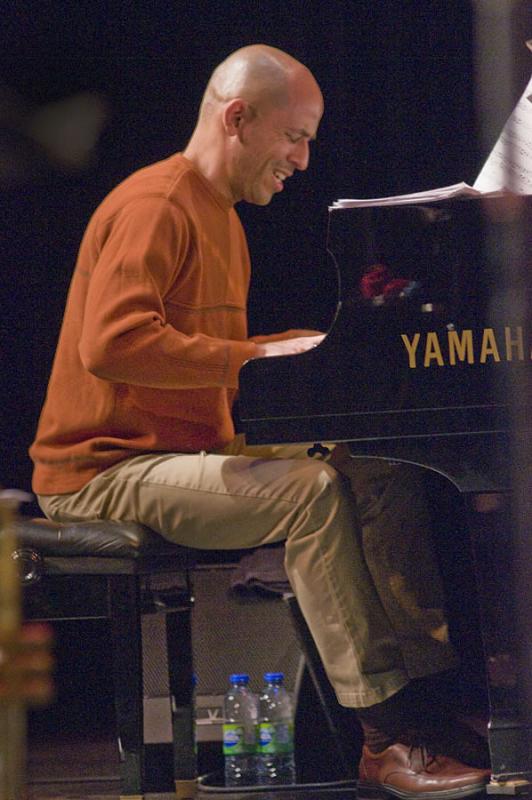 Turner—a one-time regular collaborator with guitarist Kurt Rosenwinkel but, in recent years, seen with everyone from trumpeter Enrico Rava to saxophonist David Binney and his collaborative FLY, and last heard on Sky & Country (ECM, 2009)—has always been considered a cerebral player, and while there's little doubt he's spent a lot of time honing a style that's predicated on remarkable technique and an ability to navigate huge intervallic leaps with frightening accuracy, he's got plenty of heart, too, engaging in some escalating interplay with Zenón at the end of pianist Edward Simon's lyrical arrangement of Wonder's "Ma Cherie Amour." An irregularly metered, richly harmonized take on the memorable melody led, as Simon's arrangement opened up into a piano solo of such motivic focus and invention that it's a wonder the Guggenheim and MacDowell fellowship inductee hasn't reached critical mass yet, for his work with the Collective and superb solo records like Poesia (Cam Jazz, 2009).

Simon's solo on the first set-opener, "Sir Duke," was equally impressive, with remarkable left/right-hand independence that, at one point, built to stunning polyphonic lines in contrary motion, his left hand descending to the piano's lower register while his right ascended to its upper; but what the tune also made clear, early in the evening, was that this incarnation of SFJAZZ Collective wasn't afraid to introduce some processing into the mix. Cohen's trumpet was fed through some guitar pedals—wah wah, distortion and delay pedals could easily be heard—and into a Fender amplifier, while Robin Eubanks laptop processing turned his trombone solo, during his own aptly titled "Metronome," into a sonic tour de force, with the Collective ratcheting up into some near-fusion energy.

Perhaps the Collective's greatest strength was its ability—whether on arrangements of classic Wonder material or new compositions—to blend improvisational freedom with modernistic charts that took full advantage of its mid-sized instrumental palette. SFJAZZ Collective is unequivocally a blowing band, but these were anything but simple head-solo-head arrangements. At various points during the set, band members could be seen quickly flipping sides and scrambling to opening up multi-multi-page charts in time. That everyone in the band is a leader in his own right means that when the Collective reconvenes each year, there are experiences gained elsewhere brought to the table. Harris' own groove-heavy group, Blackout—last heard on Urbanus (Concord, 2009)—may be more decidedly urban than SFJAZZ Collective, but a taste of it was an undercurrent on the vibraphonist's original, "Life Signs"—a tune which started as an ostinato-based feature for Simon, but as the group gradually entered, revealed its intrinsic complexity. 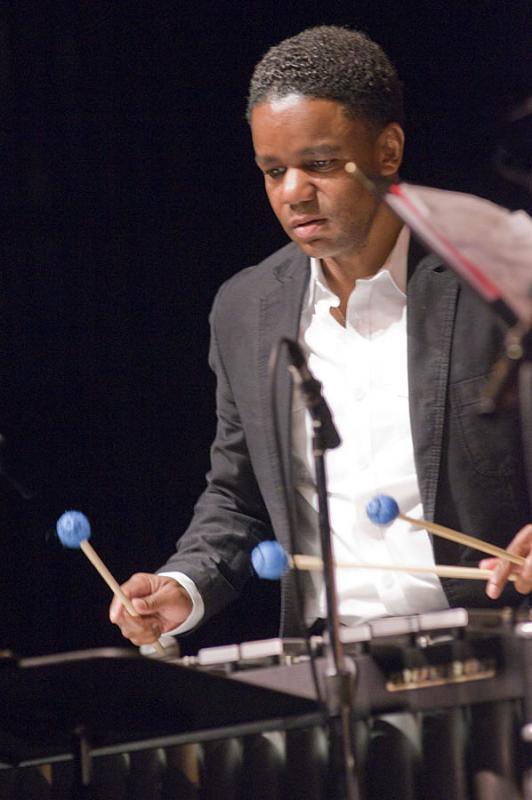 With eight strong soloists, it was almost impossible to pick favorites, and it's more than likely that those choices would change each night. With players at this level, it's unlikely anyone ever has a bad night, but they surely have better ones, and in Ottawa, Eubanks, Zenón and Harris seemed especially on fire, the cream of a very rich crop: Eubanks' ability to build solos to fever pitch; Zenón combining a particularly warm alto tone with solos that seamlessly combined head and heart; and Harris, who was capable of frightening speed and four-mallet dexterity, but who could say just as much with a single repeated note, laid into it hard.

In the spirit of its egalitarian nature, different members of the band—Harris, Simon, Eubanks—introduced the band and its tunes, but it was Cohen's introduction of the encore, his own dark but tender ballad, "Family," that drew the most laughs. After reiterating that there were, indeed, CDs for sale in the foyer, and that the band would be out to meet and sign after the show, he said "And all proceeds are going to needy families...ours." This is jazz, after all, and despite the popular and critical accolades these players draw as members of SFJAZZ Collective and as leaders of their own projects—and despite the kind of response they were able to draw from the sadly only half-full Centrepoint Theatre, nearly as loud and raucous as a full house—these stellar musicians know that they gain ground one town at a time, one fan at a time. After the show, as they mingled with the folks who hung around in the foyer, it was clear that they appreciated the value of connecting with their fans, and if their Ottawa show was any indication, they're clearly on a winning streak.

While the house wasn't as full as the Ottawa international Jazz Festival might have hoped, sponsoring this show as part of its Fall-Winter off-festival programming, it was a tremendous step forward to begin using this venue, a fine sounding room that, capable of seating nearly 1,000 people, is still able to retain a certain sense of intimacy. While the venue SFJAZZ Collective played in 2009—the downtown-located Dominion Chalmers Church—is a fine room for certain kinds of shows, anything that begins to build on volume gets lost in its high cathedral ceiling, which can be such an asset in other cases but a real liability in others. Hopefully the less-than-stellar turnout won't discourage the festival from using Centrepoint Theatre in the future, because it really is a far more suitable room for this kind of music.