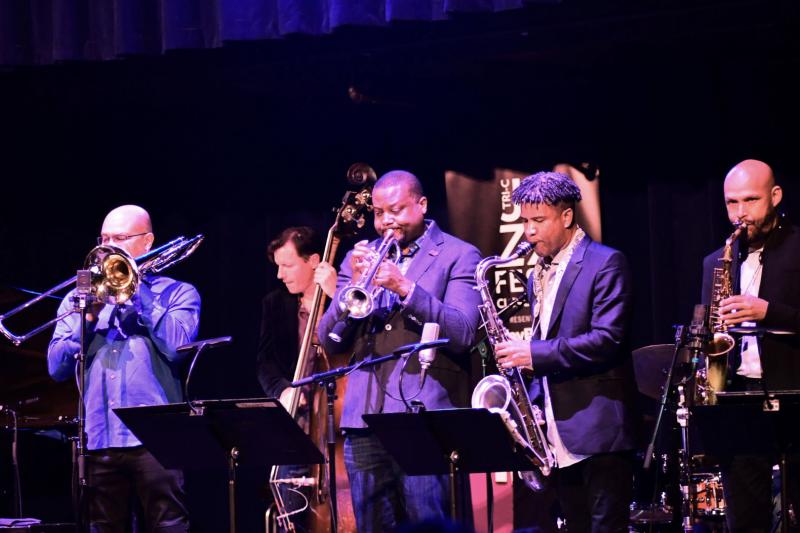 Since 2004, the ensemble of first-call musicians known as the SF Jazz Collective has represented the Bay Area in local concerts and throughout the world in a unique collaborative effort that since inception has given new life to the term repertory band. Each year the oeuvre of an iconic jazz master is given the SF treatment. This does not mean simply pulling up lead sheets, but relying on the arranging talents of the band's members to cast familiar pieces in a new and valid light. Under such a modus operandi, SF Jazz has offered inspired takes on the works of masters such as Stevie Wonder, Wayne Shorter, Herbie Hancock, Horace Silver, and Ornette Coleman.

For this year's artist, the collective has chosen to salute the music of Miles Davis, a heady challenge to take on indeed. Nonetheless, the collective talents of this octet proved to be up to the task on a chilly Friday evening in Cleveland last week. The current line-up of the group is certainly a strong one, made all the more vibrant by the fact that there is such a mix of backgrounds and cultures within the ensemble. While vibraphonist Warren Wolf, trumpeter Sean Jones, and trombonist Robin Eubanks can claim the U.S. as their native land, the rest of the band sports a more diverse makeup. Saxophonists Miguel Zenon and David Sanchez are from Puerto Rico, pianist Ed Simon comes from Venezuela, bassist Matt Penman is from New Zealand and drummer Obed Calvaire is a native of Haiti.

A generous hour and a half set got underway with pianist Simon's "Feel the Groove," a straightforward structure that nonetheless served as an aperitif for what would prove to be an inspired evening. Robin Eubank's chart for "Tutu" put Jones up front with his muted horn, the latter day Marcus Miller ditty allowing Jones the opportunity to demonstrate what a strong identity he has developed over the past ten years. On par for what might have been the most memorable performance of the evening, vibraphonist extraordinaire Warren Wolf's "In the Heat of the Night" was a tour-de force performance demonstrating that technical brilliance and heartfelt emotion can coexist.

Certainly one of Miles Davis' best known pieces, "So What" moved away from the moody atmosphere of the original to take on an brisk romp thanks to the work of Sean Jones. The trumpeter also took the occasion to demonstrate some fine story telling during his extended statement. By contrast, David Sanchez's "Canto" stepped the tempo down while putting the tenor saxophonist front and center for a superb solo. The entire piece, in fact, was the epitome of how less can often be more and that beauty is sometimes best found in the spaces between the notes.

Regularly associated with Miles Davis, although he never recorded it, the piece "Nardis" is generally linked to pianist Bill Evans. In its performance by SF Jazz, the composition hinted at klezmer overtones in its arrangement of the melody by Miguel Zenon. In fact, Bulgarian gypsy music served as inspiration for this unique hybrid that served as a quintessential closing flag-waver. Drummer Obed Calvaire would be featured at length, offering up a thematic solo that also drew freely from the land of hip hop. As a whole, Calvaire's dry snare sound and skittering rhythms are more based in contemporary styles and less jazz-like than that of predecessor Eric Harland.

As a precursor to jazz festival season this summer, Cuyahoga Community College's pop-up event with SF Jazz was a total success and the filled house validated the fact that if you offer quality music in a valid setting, people will indeed come and enjoy.