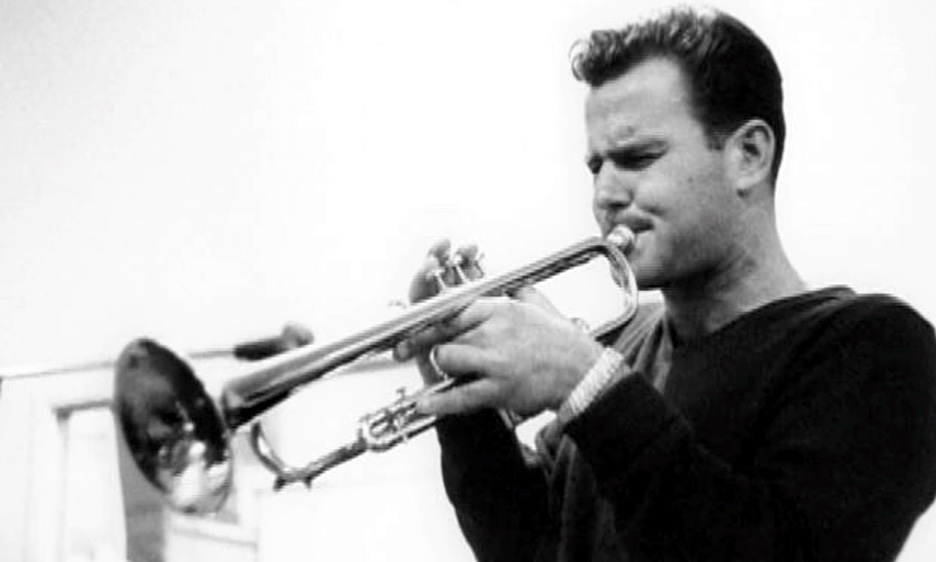 It’s too bad that more people don’t know about both Baker and Sheldon, so they could choose for themselves, rather than having the publicity machine choose for them.

Jack Sheldon (November 30, 1931) and Chet Baker (December 23, 1929-May 13, 1988)—two trumpeter/vocalists with a great deal in common. They spent their years of jazz apprenticeship, the early 1950's, on the West Coast, largely in Los Angeles. They played in similar styles and their musical career paths early on were pretty similar, although Baker got started recording earlier than Sheldon, recording more prolifically and making early waves playing with Gerry Mulligan's group. They played sessions and recorded with each other and with West Coast mainstream stalwarts like Art Pepper, Jack Montrose, Carson Smith and Chico Hamilton. Both saw drugs and booze as natural allies, loved to party; often, together.

The question I ask here is: While I would say that the reputation of Sheldon is slightly higher than that of Baker within the world of jazz musicians, the exact opposite is true outside that world. I don't have specifics on records sold, files streamed or YouTube views, but outside of the insular world of jazz, far more people would recognize Baker's name than Sheldon's.

No qualitative difference in their musical contribution would explain that. Nor is this is a case of Sheldon's being a "musician's musician;" someone whose playing is too esoteric, too ecstatic or subtle for the general public to appreciate; au contraire. My theory is that there were and are artificial cultural feedback loops that have acted as low level magnetic forces, inducing listeners to draw different conclusions about each man's comparative value as a musician. There is a documentary about Jack Sheldon called Trying to Get Good and one about trumpeter Chet Baker called Let's Get Lost. In their look, style and content, these films are appropriate representations of contrasting lives. Comparing the films begins to open a little daylight into understanding how these magnetic cultural forces played out.

In Let's Get Lost, made in 1988 by Bruce Weber, a well-known fashion photographer, both historical and current footage of Baker is presented in high contrast black and white, lending a glamorous, almost noir aspect to the film. To me, the most striking aspect of the visual content is the difference between the young handsome Chet and the current debauched and seedy Chet. Another striking aspect is the difference between the low-affect and sporadically-stoned current Chet and the winsome, carefree way his current lifestyle is largely presented. Baker's face is lined and weathered well beyond his 57 years and he is seen strolling along the beach at Malibu and zipping along the highway in a convertible with a good-looking paramour and hanging out with a batch of attractive, adoring young people. Meanwhile, a scene shot in the recording studio captures him struggling to sing "Imagination," as well as a party scene explaining that his preferred blend of opiate cocktail is the speedball. At a performance scene shot in France, Chet says before the show, "People couldn't care less about the music." The only peer musician who comments in this film about Baker is Jack Sheldon, who talks amusingly about Baker sleeping with his girl and how easy playing came to "Chettie" and how much he, Sheldon, had to struggle.

Trying to Get Good, released in 2008, is shot in color. The spine of the film is a performance Sheldon did at a 71st birthday concert at the Beverly Hilton Hotel in November, 2002. He looks beefy but robust. The filmmakers are not afraid to show a lot of closeup shots, with Sheldon sweating fairly profusely (If Baker sweat, I've never see it). Sheldon plays and sings very well, the power of the playing belying his years. His comedic timing is impeccable. Historical footage is also mostly in color, except for very early photos of him and his mother. Unlike the Baker film, Trying to Get Good is packed with fellow musicians commenting on Sheldon's sense of humor, his eccentricities and his great musicianship,

Sheldon's early life was much more fraught than Baker's. Sheldon's father left the family early on and his mother basically trailed him across the country, trying unsuccessfully to reconnect with him. Baker's father was a musician and his family was intact. Neither man was an attentive father, to put it mildly. Baker's kid's all made it to adulthood, while two of Sheldon's kids had untimely deaths, In Weber's Let's Get Lost the footage of Baker's family, shot in Oklahoma, registers like a reality show before its time.

The films don't really allow us to get a solid feeling for the music either man made in his prime. So, let's take a closer look at their playing. The link between the way someone plays and the way it's received by a listener is ineffable, but technical comparisons can be made.

Both players had distinctive sounds that are recognizable quickly. I'd describe Baker's sound as somewhat plaintive and with little vibrato, especially early on in his career. The sound was consistent from the bottom of his range to the top. His range was rather limited. He used the bottom of the trumpet range a lot and seldom played above the staff. He had a keen ear and a swift tongue and was able to negotiate chord changes with speed and dexterity. His style remained consistent throughout his career.

Sheldon's playing altered considerably over the course of time, as at the beginning, he sounded very much like Baker. In Sheldon's more mature style, his sound was different in different registers; smokier on the bottom and brassier at the top. It has a more vocal quality than Baker's with a wider variety of colors and his high range was stronger and higher than Baker's. He sometimes used a heavy vibrato and pinched off his notes, especially on ballads. He also could negotiate chord changes easily. While his sound is individual, overall, it's closer to the extroverted sound of other trumpet players than Baker's.

Both musicians sang. I wrote about Baker's singing here. In a nutshell, it was a very light, intimate, almost feminine voice and very congruent to his playing. He sang consistently between a mezzo-piano and mezzo-forte volume. When Sheldon sang, he "put across" songs. He was more expressive and tried to put sexiness in his voice in ballads. He had more control over volume and could sing forcefully or in a whisper. Sheldon was more overtly emotional than Baker.

Chet Baker. It's Always You

There was considerable difference in their looks. Baker was an extremely attractive man with chiseled features, thick hair and a fairly frail looking body. Sheldon was a bit stockier—not quite in the teddy bear category. He was pleasant looking, with a less impressive head of hair than Baker and his face had a more open quality. Sheldon joked about Baker stealing his girlfriends. As personalities, much has been written about Baker and much less about Sheldon. Both were substance users—marijuana and booze initially for both and later, combinations of meth, heroin and cocaine for Baker and lots of booze and cocaine for Sheldon. Baker continued to use until his death. Sheldon recognized his alcoholism in middle age, and then went on the wagon.

It seems like Baker never had an uncomplicated relationship. There was always something dynamic, often problematic going on with everyone—friend or lover. This was more and more the case as he got more deeply into heavy drug use. On stage, he talked very little. Sheldon was a natural comic, both onstage and off and he came across as a very jovial guy, albeit one with a wild side, especially during his drinking years. He was prone to practical jokes and the kind of eccentric behavior that might qualify him as a hippie ahead of his time. Baker served hard time because of his drug habit, but Sheldon avoided incarceration. Baker made a brief foray into films when he was young and handsome, but was never much of an actor. Sheldon was very interested in acting, although his one foray into an acting class ended in disaster. Ultimately, however, he did a lot of acting on television, was a stalwart musician/entertainer on the Merv Griffin television show for many years and has continued to work consistently as a trumpeter, singer and actor. Stepping back, we see two guys of the same age cohort who were pretty much equals in terms of how well they played the trumpet. Both men had long careers—Baker about 40 years (off and on) and Sheldon 60-65 years. One had the clear edge on looks. Both had self-destructive behaviors, although one recognized that and got clean.

It's hard for me not to think that it's been the selling of the mythology of Chet Baker that has created the difference in their public reputations, not their music. The Baker mythology was cooked up by an advertising and commercial machine able to piggyback off his looks and "bad boy" image and turn him into an archetype of the "romantic" jazz figure. Jack Sheldon was far from white bread, but his "availability" as a person, his broad smile and comic precocity are not the stuff from which romantic jazz myths are concocted. In this film, Baker plays the ill-fated romantic lead and Sheldon, even though he plays arguably better trumpet, plays the trusty comic sidekick. Personally, I'd rather hang out with Sheldon than with Baker, with whom I actually did hang in D.C. As far as whose music I prefer, that depends on my mood. I do think it's too bad that more people don't know about both guys, so they could choose for themselves, rather than having the publicity machine choose for them. Somehow, that bugs me.