By GERMEIN LINARES
November 19, 2005
Sign in to view read count 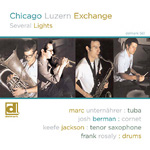 The Chicago Luzern Exchange is made of three Chicago-based musicians—cornetist Josh Berman, saxophonist Keefe Jackson, and drummer Frank Rosaly—plus one Swiss, tubaist Marc Unternährer. The group's rather nerdy name does little to entice the listener, though its music certainly will. This is free jazz, with shapes and forms, melodies and rhythms in a constant shuffle. While similarly derived ventures often result in noise, the Chicago Luzern Exchange thankfully finds plenty of music in its schemes.

The mode of attack on Several Lights usually involves a soloist and drummer Rosaly providing the initial thrust, with the group's various other pieces chiming in, departing, reconsidering, engaging, provoking, or simply admiring the others' multi-dimensional abilities. As such, defining this music is elusive and completely unnecessary; the experience, the moment, is what matters most on Several Lights.

A surprising feature on the album comes in the various lengths and themes the group undertakes. Some are extremely brief (twenty to thirty seconds), while other explorations, like the thirteen-minute "Take the Place," seem epic in comparison. This is yet another dimension, another amusing and engaging proposal, by a well-meshed group. Now, if they'd only reconsider that name...

Slips; Five Handfuls; Three of Three; Skidding; One of Three; Trouble; Our Thing; Pedal Past; Soon Enough; Dos; A Little Paler; Fairly Fast; Walls; Take the Place; Over the Wire; Spend Your Life; Two of Three; Someone Came; One-o-one.