By MARK CORROTO
November 14, 2013
Sign in to view read count 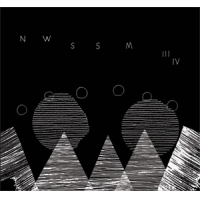 Parts III and IV of a seven part cycle, trumpeter Nate Wooley's long form electro-acoustic work Seven Storey Mountain gains additional players and momentum with these two live performances. The music was originally commissioned for the Festival of New Trumpet Music, which has seen a shuffle in its performers, but the concept of muscle rapture endures in these sounds.

Wooley, a central figure in the world of modern improvisation, has been heard in bands led by Anthony Braxton, John Zorn, Mary Halvorson, Harris Eisenstadt, and Evan Parker, to name just a few. He also leads a quintet, plays in duo with drummer Paul Lytton, saxophonist {Ken Vandermark}}, and with trumpeter Peter Evans, with whom he shares a passion for solo performance and extended technique that includes electronics.

The concept of this cycle is to simulate the ecstatic experience described by Trappist Monk Thomas Merton in his book of the same name. The music is both introspective and noisily rapturous. Wooley applies equal parts silence, extended technique, electronics, feedback, and progressing drone sounds to build from a seemingly internal meditation to an external expression. Part III adds guitarist David Grubbs, drummer Paul Lytton, two vibraphonists— Matt Moran and Chris Dingman—to Wooley's core of Yeh and Corsano for this 2011 live performance. IV swaps drummer Ryan Sawyer for Lytton and Ben Vida (electronics) for Grubbs, Moran is the sole vibes player here, and Wooley adds the Tilt Brass Sextet for more depth.

The two discs, each populated with a single track, begin simply, III with the ringing of vibraphones, and IV Corsano's brushwork and vibes. Each piece progresses not unlike a Merzbow noise piece, except Wooley paints his crescendos without the violence inherent in Japanoise music. The music, a direct descendant of John Coltrane's Ascension (Impulse!, 1965), builds upon Coltrane's discovery (towards the end of his life) of the spiritual nature of free jazz. Wooley has taken the raw materials of Coltrane, Merton, and perhaps Thich Nhat Hanh and begun his own journey.