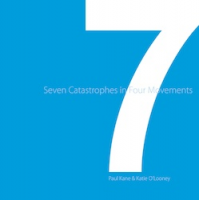 Seven Catastrophes in Four Movements continues the distinguished and eclectic history of collaborations combining poetry with jazz or improvised music. It is a meeting between US poet Paul Kane (also Professor of English at Vassar College) and the Irish improvising sonic & visual artist Katie O'Looney. When the two met at a poetry reading in the south of France, they casually spoke about working together. After agreeing to work on a project centred on the number seven, they began experimenting with sound and poetry. It was soon clear that they would have to complete the compositions live; the project needed spontaneity and a healthy dose of improvisation. For a period in summer 2012, the pair became artists-in-residence at The Guesthouse, Shandon, Cork—as Kane observes, "the perfect arrangement in the perfect place."

The compositions bear evidence of the time and thought the pair invested in them. At thirteen minutes, the four-part title track dominates the album. Although inspired by Kane reading about Catastrophe Theory, it throws little light on the subject. His words focus on catastrophic events, mainly consisting of slowly-intoned, portentous phrases which effectively build an atmosphere. At times the words are surprisingly reminiscent of Yoko Ono's verse, for example "Stand still like a tree / and sway / give way / to whatever is given." Kane has a gentle mellifluous voice that is easy on the ear, making extended exposure to it pleasurable. O'Looney employs a variety of struck and scraped percussion, plucked strings, and keyboards to generate abstract musical interjections that add emphasis and heighten atmosphere. Their role is similar to that of film incidental music, a field in which she would seem to have a promising future. As with any successful collaboration that straddles boundaries, there is symbiosis between Kane's verse and O'Looney's music, each being enhanced by the presence of the other.

The three shorter tracks that complete the album share the title track's strengths and display different facets of the pair's talents. "The Garden Wall" is a more conventionally-structured narrative poem, again enhanced by the music. On "A Memory Room Impromptu," after the recitation, O'Looney is given space to play alone; her music is tantalising, leaving one wanting to hear more, but is cut short just as it is gaining momentum. "Co. Kerry" concludes the album on a high, words and music dramatically conjuring up the atmosphere of its subject, a small fishing village; again, it finishes atmospherically with O'Looney playing alone.

The combined running time of the four tracks here is under twenty-four minutes, so the focus of this release is on quality not quantity. Typically for Farpoint, that quality extends to the packaging of the limited edition CD, which is housed in an attractive enlarged (6 inch / 15 cm.) fold out, five-panel sleeve featuring the poetry and notes on it by Kane. In every way, this is a very desirable item that leaves one hoping for a follow-up by the pair or even a solo recording from O'Looney.

About Paul Kane and Katie O’Looney