By DOUG COLLETTE
February 10, 2018
Sign in to view read count 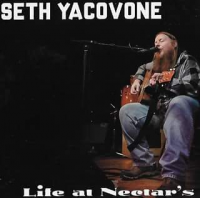 The title of Seth Yacovone's solo acoustic album, Life at Nectar's, is not a misprint, but a very carefully designated description. In the prolific guitarist/vocalist/songwriter's thirteen years of such shows each Friday evening, the energy at the hallowed venue coalesces around his performances. And while those are somewhat unlike this set of fifteen originals—he invariably mixes his own songs in with choice selections of Bob Dylan, Neil Young, the The Rolling Stones and Jerry Garcia/Robert Hunter—the original material highlights his near-impeccable taste without being derivative of it.

Prolific as is Vermont native Yacovone, in addition to his weekly appearances at the house that Phish built, he also makes regular stops in a similar setting, around the Queen City but not limited to its environs, all of which have become a regular component of an itinerary traversing northern Vermont, integrated into a schedule featuring dates with full ensembles, including the Seth Yacovone Band, a blues trio under his name, and ongoing homages to the Grateful Dead.

So, even apart from the surfeit of material, it would only stand to reason that Seth would choose to document what he calls his "wooden music." And it is, arguably, the clearest reflection of his virtues as a musician: deep feeling translated with consummate (yet not overweening) technical skill, buoyed by a near encyclopedic and eclectic knowledge of roots and a keen self-awareness of his influences, all of which he tempers with zen-like good humor.

Yacovone invariably gains momentum during the course of these solo sets and this collection is an accurate depiction of that process. Sometimes the progression is almost imperceptible, as it is here, but there are those instances where Seth deliberately and purposefully launches himself into a higher level of intensity and his facile use of a slide on his guitar is often the trigger point of such instances; on Life at Nectar's, "Dipper Blues" performs that function through an exorcism of bitterness, the cleansing likes of which lyrical references the man fires off almost as fast as his fingers move on the fretboard. "Missing Peace," meanwhile, becomes something of a mirror image of that edgy composition and its like-minded rendering and although the song doesn't exactly belie its title, the rise and fall of its chord sequence carries equal parts ease and tranquility as do the deep, smoother-than-usual tones of Seth's vocal (he often sounds more gruff in his singing).

Seth Yacovone is hardly an insular inhabitant of the Green Mountains (he called his last solo album Land of Split Decision (Self-Produced, 2008) a title for our times if there ever was one!), so it's little surprise a broadminded attitude comes through in "The Singing of the Song" and, even more directly, "Don't Miss Your Chance to Speak." Writing his liner notes in the same matter-of-fact manner he speaks, the burly, hirsute musician recounts the gestation of this record, taking something of a circuitous route in crystallizing the content of this single CD and, in doing so, comments the name for this album might've been taken from one of its tunes, specifically, "Nothing Is Perfect;" he could well be correct on that front, but the blemishes, few and far between as they are, hardly become any more readily discernible on repeated listenings than, in real time, sitting a few feet away from the cramped stage he occupied for this single recording (though because he chose not to include any sounds from the audience, he might well have relegated the inclusion of his own 'Thank you's' to just a single such recognition near the end)

Dispensing with the concept of a composite array of live culls, Life at Nectar's is thus a document of one performance from September of 2017. "I Could Have Won the Prize" evinces the careful craft of Yacovone's composing method, the world-weary but resolute tone of those lyrics permeating its melody and, in turn, the author's the performance. Likewise, "The Prayer and The Wing" is portentous but nevertheless expectant, an attitude of forthright optimism that also radiates from the very next cut, "The Sun Still Faces the World That Turns Itself Away." It's a measure of Yacovone's fundamentally resolute and persevering work ethic that he can write and sing with such down-to-earth authority on such an otherwise ephemeral topic, so it's wise he utilizes some deft finger-picking to complete the thought(s) he wants to express here. The rough texture of his voice, no doubt a careful choice tailored to the tune, further cements his ideas.

This peripatetic player utilized a similar forethought and attention to detail in planning out this near seventy-minute setlist. The ebb and flow of the show is steady, from beginning to end, with "Place" an ever-so-fitting conclusion: as much as this bright, sprightly number sounds like an ages-old traditional, the tune also comes across as a paean to the room in which it was recorded. And, as is so often the case with such Seth Yacovone shows, it comes complete with a fiery improvisational segment, the most extended interval of its kind here and smartly relegate to near the end, so as not to overshadow the songs upon which he wanted to place focus for the release.

The winner of Nectar's "Lifetime Achievement Award" brought comparably sound judgment to bear on the production and packaging for this title. Fellow musician and drummer of SYB, Steve Hadeka, artfully designed a sleeve adorned with local photographer Brian Jenkins' color shots on the front back and gatefold of this digi-pak, all of which radiate the same true to life warmth as the sound quality overseen through the auspices of the Burlington landmark's house sound scientist Sergei Ushakov (and subsequently mastered with care by Lane Gibson). All that said, to state it's still worth seeing Seth Yacovone solo doesn't deny what a complete package is Life at Nectar's.

Track Listing: Wait A Spell; I Could Have Won the Prize; The Prayer and The Wing; The Sun Still Faces the World That Turns Itself Away; Brother O Brother; The Singing of the Song; Dipper Blues; Don't Lie to Me; Missing Peace; Bound to Be; Nothing Is Perfect; After it's Gone; Waste Away; Don't Miss Your Chance to Speak; Place.