By ROGER FARBEY
September 26, 2017
Sign in to view read count 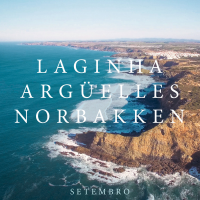 The first few plaintively wistful minutes of "Mãos na Parede" undergo a sudden and unexpected step change into a playfully vibrant coda. The upbeat mood continues with "Fisicamente" (translated as "physically," the essence of which it undoubtedly portrays), the soprano and piano initially tracing out the exuberant melody. Norbakken provides a subtle but insistent drumming pattern to "Serralves," which adds considerably to its overall dramatic effect. The helter skelter opening to "Coisas da Terra" subsides after two minutes to give way to a more sedate pace, and sees Argüelles's lithe soprano juxtaposed against a succession of Laginha's block chords before the piece melts into a more pastoral setting.

Eight of the ten tracks on the album are composed by Laginha but two are by Argüelles. "Hugger Mugger" is quietly lugubrious and segues seamlessly into Arguelles's second composition on the album, "Yada Yada," which is more forceful than the preceding track, largely due to Norbakken's often disquieting percussive contribution. Nevertheless, a groove, of sorts, is eventually revealed. On the final two numbers it becomes clear that Norbakken's presence is vital as he sporadically throws into the mix disconcerting, sometimes almost imperceptible percussive sounds, quiet hand drumming, faint cymbal swooshes or discombobulating bangs and crashes, which uncannily bind the sax and piano together. Ultimately, this gorgeous album leaves the listener in a state of sublime tranquillity.