By GLENN ASTARITA
March 5, 2012
Sign in to view read count
Track review of "Can You Hear Me" 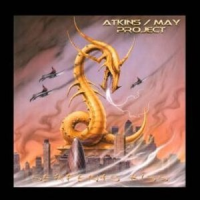 Improvisation is an element that spans numerous musical genres. The ability to build an effective improvised storyline relies on an artist's creative spark, technical acumen, and communication skills through the looking glass of art. Here, eminent guitarist and producer Paul May displays an authoritative voice and highly imaginative improvisational skills during his summit with vocalist Alvin Atkinson, Jr., known for his work with Judas Priest and Holy Rage. Firmly entrenched in the heavy metal format, Atkins' strong vocals, with his gruff overtones, act as an additional instrument, providing contrast for May's thriving parts and mind-bending solo jaunts.

"Can You Hear Me" is a plunging straight-four piece characterized by pulsating backbeats and a hot 'n' nasty impetus, and embellished with May's torrid crunch-chords. The guitarist's solo spot, tinted with reverb and sustain licks, translates into a theme-building sortie engineered on a linear revitalization of the prime melody, focused on off-center phrasings, and containing intermittent surprises.

May zooms in for the kill in animated fashion as he makes his guitar sob and wail, offering more substance than the pointless indulgences heard on many albums of this ilk. The guitarist drives it all home with fluent chord structures that ascend towards a zenith, embedded with zinging dynamics in concert with Atkins' full-bodied vocals. Loud but not superfluous, the artists impart a touch of class to a genre that is sometimes tarnished by ridiculous story lines and humdrum ensemble work, where ear-crunching volume often looms as the primary focus.

Al Atkins: vocals; Paul May: guitars, all other instruments.