By GLENN ASTARITA
March 9, 2009
Sign in to view read count 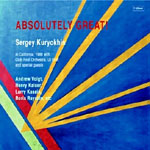 This seven-disc boxed set was recorded at performances by the late Russian composer and keyboard player Sergey Kuryokhin in San Francisco in 1988. Kuryokhin was a musical genius who challenged the Soviet era's denial and repression of Western culture. An in-depth booklet chronicles his sojourn in the USA and the events leading up to these performances (which were part of a longer US tour). It also reprints San Francisco Examiner journalist Phillip Elwood's 1988 piece "Soviet Pianist Enjoys Spirited Artistic Freedom," a glowing review of Kuryokhin's artistry, vision and stage presence during his debut at the Bay Area's Noe Valley Ministry. Elwood also acknowledges the widespread opinion that Kuryokhin was the "greatest contemporary keyboard player in the Soviet Union."

On the discs, Kuryokhin performs with the Club Foot Orchestra, among others, while also venturing into some mind-boggling extended solo workouts. The first disc's "October 21st, Part 1" commences with the artist's mesmerizing blend of classical structures, avant-garde dissonance, trad jazz shuffles and more. He plays with the music's oscillating undercurrents and injects effective variations of dynamics and pitch. At times, he might seem like Mozart on steroids, augmented by lovely waltz vamps and hyper-mode crescendos.

Kuryokhin's enthralling travels segue into his collaboration with The Club Foot Orchestra, a seven piece horns, guitar and rhythm section unit comprised of West Coast artists. Here, droning horns and swooshing cymbals open the gate for a prismatic progression of unorthodox voicings. The recurring requirement throughout the discs is that the listener should expect the unexpected.

The track titles, obviously, simply represent the date of each the performance—with the exception of the seventh disc, which showcases Kuryokhin's acoustic-electric duo with the pioneering guitarist Henry Kaiser. It's a reissue of the 1989 Rycodisc album Popular Science. On this outing, the Kuryokhin uses Synclaviers amid Kaiser's stinging electric guitar licks, producing dark textures with avant morphings of blues, classical, rock and other styles. The continually evolving music moves forward through a cinematic-like string of events.

Kuryokhin's piano wizardry and boundless current of improvisation flourish throughout these entrancing discs, where, to instance just one unexpected trajectory, lush romanticism might encounter abrupt transformation into a theme that would fit snugly into a fast-paced silent film score. Ever the audience pleaser, Kuryokhin pursues a playful sing-along on fifth disc and aligns with Club Foot saxophonist Andrew Voigt for a quietly soaring encounter teeming with contrapuntal exchanges. The two musicians inject humor while also delving into space-rock, tango and an amalgamation of mini-motifs, and create a gamut of emotive sentiment via spiraling free-jazz movements and easy-going struts.

On some tracks, Kuryokhin teams with the band Ut Gret, which is a large ensemble comprised of guitar, horns, strings and woodwinds. This partnership launches another exploration mission, its ominous staccato phraseology leavened by airy flute choruses (played by Dean Everson). The music ranges from off-kilter chamber etudes to free-spirited improv. Kuryokhin also prompts a few meltdowns and fuses lavish melodies into energized free-jazz vehicles. There's so much going on during these mood-enhancing ventures that it's difficult strictly to categorize the sum of the parts. That's a good thing, and makes Kuryokhin a hard act to follow. Sadly, his career came to a premature end with his passing in 1996. The program luminously conveys Kuryokhin's superior and forward-thinking qualities, and stands as a vibrant and valuable testament to his singular command of diverse East/West musics.

Absolutely Great! is being released as a limited edition of 500 copies, of which 250 will be shipped to Nastya Kuryokhina, Sergey's widow, in Russia. Nastya organises the Sergey Kuryokhin International Festival in St. Petersburg.