By JEFF WINBUSH
October 7, 2013
Sign in to view read count 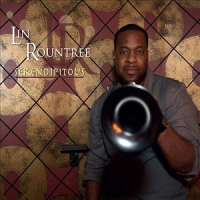 When a musician goes into the studio the opportunity always exists for something special to come out. They can really go for it and go in a bold, fresh, new direction and see if something innovative and exciting is the result.

Or they can just make the doughnuts. Serendipitous is the sound of Detroit-based trumpeter Lin Rountree making doughnuts.

The problem is Nate Harasim's pedestrian production and arrangements which are stock and unimaginative. Rountree is a competent trumpeter, but based on his playing here he's not an inspired one. He shows up, puts the horn to his lips, blows and...nothing much happens. It's not really bad, but it's not really good either. Mostly it's just a shoulder shrug and a "meh."

What sinks Serendiptous into mediocrity is how Rountree never aspires to more than innocuous riffs and bland noodling that tip-toes right up the edge of going somewhere interesting, but nope—it's just a tease. Rountree and Darryl Dixon's guitar gets some nice interplay going on "We Chill" but before it can build to anything it dribbles away to nothing as the song fades out at 3:45. The same thing happens on the title track, "Serendiptous" as a nice piano solo by Harasim fades away into the ether as the tune crosses the four minute mark.

Playing long isn't the same thing as playing good, but there's a point where the refusal to let the musicians stretch a bit makes it look, for all appearances, like they're punching a time clock. Above all else, jazz should be about breaking boundaries and going beyond expectations. It's not as though Rountree isn't capable of it as the one-two punch of "Gutter Funk" and "Have Some" make clear he can get down with the best of them, but there's simply not enough interesting moments here to balance out the uninteresting ones.

Rountree is signed to CutMore Records, the developmental label of Trippin' n' Rhythm records which is a good move because at present Rountree isn't quite ready for the spotlight. On his website's bio page, Rountree counts Woody Shaw, Freddie Hubbard and Miles Davis among his influences, but it's hard to find any trace of any of them on Serendipitous which only merits an indifferent "So what?"

We Chill, Serendiptious, In the Day, Gutter Funk, Have Some, Dance With Me, Why So, Let It Groove, Eyes On You, Get Down, Takin' It Slow