Septeto Nacional at the Brava Theater 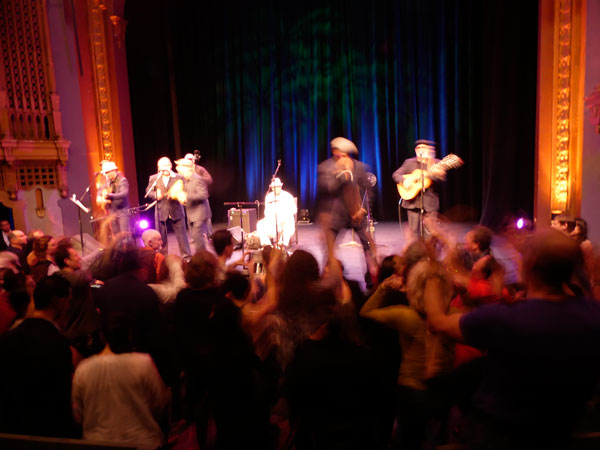 In 1927, Ignacio Pineiro formed a group to play Cuba's traditional son music, a genre germinated in the black communities of rural Cuba. Pineiro added a cornet player to add zest and appeal, and the band, the Septeto Nacional, really took off. While the band has dissolved only to be reborn a few times, his innovative creation, the son habanero so

und, proved the precursor of most of today's Latin musical styles. Fast forward to 2016. Now on its fourth "generation," the current version of the group took the stage at the Brava Theater, a former movie theater even older than the ensemble. Brava director Anastacia Powers-Cuellar introduced the group, informing the audience "We sold forty less tickets so you could dance." Ricardo "Robertico" Oropesa Fernández—a dapper gentleman in a maroon suit with tight waistcoat—took the front mike and fired off an introduction in Spanish. Then, moving over to the guitarist, he fingered some strings, threw down some dance steps, swung his arms and departed. (Later he returned to sing and play the güiro for part of the set.)

Appropriately enough, band founder Ignacio Piñeiro's fiery tune "Echale Salsita" was first up. Piñeiro penned it on a train to the Century of Progress International Exposition in Chicago in 1933, and it was the first son song to use the word "salsa" in son. (George Gershwin, visiting Cuba in February 1932, had met Piñeiro, who then influenced Gershwin's "Cuban Overture.")

As another Piñeiro tune, "Esas No Son Cubanas" began, a man in a plaid shirt took the dance floor. He was swiftly joined by a number of enthusiastic couples with diverse ages and backgrounds. A woman to my right posted the video she had just taken with her cell phone. One silver- haired gentleman, seated in the front next to his similarly slim and silver- haired wife, had his fingers in his ears.

Bongo player Francisco "Frank" ("El Matador") David Oropesa Fernández, jumped up from his chair at intervals; he shared introductions with loquacious vocalist Eugenio "Raspa" Rodriguez. Rodriguez who might be the world's oldest rap star. "Is he actually saying anything?" I heard someone behind me question at one point.

"El Diablo Tun Tun" featured the searing trumpet of the talented Agustin Someillán Garcia. Bearded and black-suited guitarist vocalist Dagoberto Sacerio Oliva proved a solid presence, as did maracas player Crispín Díaz Hernández. The band seared through "Consuelate Como Yo" and "Convergencia-Bienvenido" and cha chaed its way through the infectious "Cha Cha Cha Pa Gozar," before Cuban expat and local music presence Tito Gonzalez took the stage to guest on vocals for the plaintive classic bolero "Lagrimas Negras." The tune had its genesis when composer Miguel Matamoros, then residing in a pension in the Dominican Republic's capital of Santo Domingo, heard a woman sobbing in the next room. Falsely presuming that she was grieving for a lost family member, he discovered instead that her husband had deserted her, a revelation which inspired the tune.

Some more hot, rollicking numbers ("Mueve La Cintura," "El Cuarto De Tula," "El Final No Llegara," and "Chan Chan") followed before "Guantanamera," the Cuban tune best known to Americans, was performed with enthusiasm. An adaptation of a poem by independence leader José Martí, it was adapted and recorded by folk protest singer Pete Seeger in 1963. Seeger had intended it to serve as one of the anthems of the peace movement during the era of the Cuban missile crisis and had asked people to sing it to symbolize unity between the American and Cuban peoples to "hasten the day [that] the USA... is some sort of bilingual country." Tito Gonzalez also guested on this, urging the audience on. For the encore, the band played robust "Candela Mi Son" with vocalist and maracas player Crispín Díaz Hernández taking center stage as various sizes and shapes of women were pulled up onstage to dance. Much too soon for the audience, the band departed.