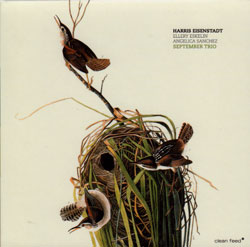 In the global jazz community, drummer Harris Eisenstadt has spiraled to prominence via his technical capacities and insightful compositional prowess via large and small ensembles. His musicality supersedes that of most drummers, where he takes a holistic approach to variable tangents and architectures. With his September trio, armed with an equally prominent support system, Eisenstadt charts the mood or biorhythms of September, 2010, capturing and propagating a broad plane of sentiment, executed at either slow or medium-tempo processions.

The trio generates a lightly buoyant plot that may emanate from an inspirational fact or idea, with Eisenstadt dancing and darting across the kit to accentuate Eskelin's yearning notes amid a spirited discussion. "September 1" is an impressionistic piece, funneled through the looking glass of art.