By GLENN ASTARITA
October 15, 2013
Sign in to view read count 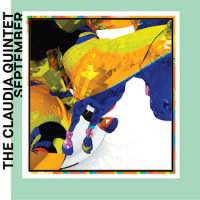 September is a month that signals the return of football, the advent of fall, and when the youngsters say goodbye to summer and venture back to school. But for bandleader and drummer John Hollenbeck, it's when he seeks isolation and concentrates on artist residencies. September is The Claudia Quintet's seventh-release as the celebrated ensemble reaffirms its domain as an extraordinarily hip and unique entity. Under Hollenbeck's direction, the band radiates a disparate focus that includes minimalistic oeuvres amid tightly-woven and penetrating rhythmic motifs frequently yielding a colorific and effervescent soundstage.

The musicians also venture into avant impressionistic formats, noticeably evident on the cleverly patterned "29th 1936 Me Warn You," where they propagate a faintly bizarre musical score for a 1936 Franklin Delano Roosevelt speech on political partisan trickery. FDR's words are occasionally looped as the band shades and mimic his oration into a thematic incursion that rings like a pseudo- documentary. Moreover, new band member, accordionist Red Wierenga and vibraphonist Matt Moran instill dabs of grave sentiment into the off-kilter contours.

The musicians build upon harmonically appealing ostinato vamps atop straight-four grooves and odd-metered structures that give way to intense dialogues or layered choruses offset by succinct detours and tuneful counter-maneuvers. Several works offer mind- bending or hypnotic subplots embedded with loosely organized dissections. On "18th Lemons," they launch a spirited rock pulse, leading to impromptu exchanges between the soloists. And they regenerate matters into an ominous and slower-paced rock pattern, packed with noise-shaping treatments and Chris Speed's oscillating sax lines.

Alternating moods and a bit of psychological nourishment is enacted during "12th Coping Song," where Speed's dark clarinet lines—tactfully highlighted with a trace of reverb—ride above Moran and Wierenga's ostinato as Hollenbeck paints a gentle rhythmic background via his brushwork. Essentially, the music projects imagery of a situational analysis and closes on a quiet note. Indeed, September is a production that imparts another testament to their enduring resilience and idiosyncratic representation of the jazz vernacular. (Passionately recommended....)