London and Glasgow Improvisers Orchestra: Separately and together 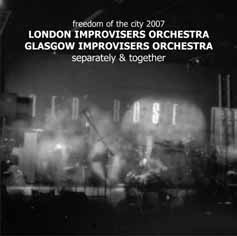 Recorded at the 2007 Freedom of the City Festival, the album features the London Improvisers Orchestra and its Glasgow counterpart. (Guest performers are a fine tradition at FOTC.) The LIO did a set, then the GIO and then they played together. Given the number of musicians involved, and the absence of rehearsal, listeners will be surprised at the coherence and delicacy of much of the music here.

As so often, the pieces mainly consist of "conductions" wherein one musician directs the orchestra, giving an overall form and structure to each piece—at least, that is the intention. So, Philipp Wachsmann's "On the point of influence" closes with a long restrained duo for violin and bass, while Ashley Wales' "Study for Oppy Wood" is an atmospheric tone poem.

In addition to such conductions, there are free improvisations by both ensembles. The LIO use improvisations as bridges between three of their conductions. The GIO—who use free improvisation more than conduction—include one long improvisation, "Big ideas, images and distorted facts" [and yes, that title is a Dylan quote, from "Idiot Wind."] The GIO argue strongly that large ensembles can freely improvise without degenerating into cacophony—"the cocktail party effect"; this piece provides compelling evidence that they are right.

On the improvisations, it is fascinating to hear how controlled the players are when given their freedom; far from producing a free-for-all, the improvisations are highly focussed, frequently achieving a poignant fragile beauty through collective negotiation. Indeed, it is ironic that in several conductions the conductor actively encourages a free-for-all—goading the beast rather than taming it—the complete opposite of the original intention of conduction. So, in "Hive Life," Alison Blunt's conduction, in addition to some music that (thrillingly) borders on anarchy, the string players are encouraged to use their voices, which they lustily do, at times sounding like a mutinous crew or an angry mob. It is only fair to add that this conduction also contains a prolonged section of subdued atmospheric playing from the saxophones; Blunt was clearly in control throughout! On "Too late, too late, it's ever so late," Terry Day incites anarchy to accompany his recitation on global warming.

The final three long conductions, on which the two orchestras combine, involve over forty players. This is a remarkable exercise in coherence considering the fact that this is a combined ensemble, of two separate orchestras with quite different sounds. Again, the overall restraint is commendable, but when the full power of all the players is occasionally unleashed the effects are awesome... made all the more awesome by the contrast with the more subdued passages. This is most starkly illustrated in "1 + 1 = Different," a joint conduction by Glaswegians Una MacGlone and Raymond MacDonald, in which a huge central crescendo is immediately followed by near silence... that then builds to another barnstorming climax.

The entire two discs are a powerful argument for the continuing appeal of large improvising ensembles and of free improvisation, here both thrilling and surprising in equal measures.

Impro Intro; On the Point of Influence; PW to AW; Study for Oppy Wood; AW to AB; Hive Life; Too late, too late, it's ever so late; Seven Sisters (for Barry Guy); Stagione; Big ideas, images and distorted facts; 811 Joint Response; 1 + 1 = Different; Outlaw.