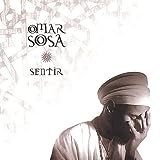 Cuban composer/pianist, Omar Sosa’s brand of world-jazz is prominently conveyed throughout this release - featuring, Moroccan vocalist, El Houssaine, Venezuelan percussionist, Gustavo Ovalles, and others. Sosa and co. also multitask while performing on indigenous percussion and stringed instruments emanating from Cuba, and North Africa amid conventional Western fare. Nevertheless, this is a true world music venture, augmented by Sosa’s delicately rendered chord progressions and jazzy right hand leads. The pianist’s musical concepts and methodologies include his associates’ soft vocals, Rap, and poetic narratives atop bustling rhythms and choral chants. And no matter how you view it, Sosa is a true merchant of joy via his flowing statements and warmly enacted arrangements. However, a few of these pieces suffer from being somewhat unwavering in scope and execution.

Sosa doesn’t present anything that could be deemed risqué or overtly novel on this outing, yet part of the magic lies within his heartfelt approach and jubilant spirit. Here, the artist propagates the heartbeat of the global community via a series of multifarious rhythmic structures and affable melodies - despite a few minor lulls in the program.