By HRAYR ATTARIAN
December 16, 2014
Sign in to view read count 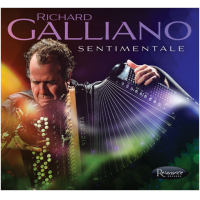 Accordionist Richard Galliano is a true innovator of both the extemporized role of his instrument and of the fusion of French folk music with jazz. His breathtaking instrumental facility combined with a creative ingenuity makes his oeuvre, particularly the series of superb albums on Dreyfus Jazz, uniquely satisfying. In view of this, his release on the non-for-profit Resonance Label, Sentimentale is a bit of a letdown.

A couple of Galliano compositions, and a few jazz, Bossa Nova and pop standards are among the dozen of tracks that constitute the album. Despite the diversity of their origins the superlative quintet's interpretation of these songs makes for a thematically cohesive recording. The musicians, however, both as individuals and as a group, play it safe and do not expand a great deal on the melodies and motifs inherent within each piece.

Saxophonist John Coltrane's "Naima" gets a breezy makeover with Galliano's eloquent solo merely adding some harmonic adornments to the classic. Guitarist Anthony Wilson brings a tad of intrigue with his Indian flavored strums as he takes his turn in the spotlight.

Wilson and pianist Tamir Hendelman let loose an elegant cascade of notes on pianist Dave Grusin's effervescent but ultimately lightweight melancholic ballad. Galliano serenades the band with a sublime romanticism. His own impressionistic "Ballade Pour Marion" features his ardent yet subtle performance that conjures images of intimate cafes and a late night ambience.

The lyrical Galliano penned "Lili" is a hauntingly gorgeous duet between Wilson and Galliano and although short on spontaneity it closes the disc with a refined and poetic touch.

Despite being disappointingly smooth and rather superficial in improvisational rigor Sentimentale is highly enjoyable and charming work. This is primarily due to the seamless camaraderie among the band members and their high caliber musicianship.

Armando's Rumba; Canto Invierno; In A Sentimental Mood; The Jody Grind; Ballad For Marion; The Island; Plus Fort Que Nous; Why Did I Choose You; Verbos Do Amor; Naima; Mantiqueira; Lili.