By JERRY D'SOUZA
November 5, 2009
Sign in to view read count 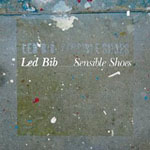 An education can be an asset in more ways than one. Drummer/composer Mark Holub formed his band Led Bib in 2003 as part of his M.A. at Middlesex University in London, England. The initial line-up was fluid, settling down to the current one with Liran Donin (bass), Toby McLaren (keyboards), Pete Grogan (saxophone) and Chris Williams (saxophone) in 2004. From then on the band established a reputation for its quirky, off-kilter brand of music, drawing from the portals of jazz, funk, rock and electronica that it wraps in high energy impulses.

Having coalesced as a group, Led Bib began a round of tours and recordings and, in the process, built up a solid critical reputation. The extension of this is seen in the band being shortlisted for the 2009 Barclaycard Mercury Prize. Sensible Shoes shows just why Led Bib's music has created a strong impression.

The band springs several surprises on its road to invention. A structured, flowing head on "Yes, Again" erupts, jumping up taut and tensile before it is quickly absorbed into linearity by the saxophone. The corkscrew rhythm bed is the home for a marching sax, free riding jazz idioms and a blues implosion. Statis is not one of their strengths and more power to them for that.

Led Bib is adept at building atmosphere, a trait that gets its vantage point on "Early Morning." Grogan and Williams shed an iridescent light that is warm and glows gently. The mood lingers and saturates the senses as bass and drums extend the ambience. Melody is crafted, the pulse grows stronger, and then, explodes in glorious abandon. The movements are seamless and enthralling in their impact.

"2.4:1 (still equals none)" is atmospheric and could well be a soundtrack for a suspense or horror film. The saxophone wakes up with a lonely note, the keyboards squiggle, yawn and let go an occasional whoosh and the rhythm is spaced out. Nothing is as it seems, except change.

Led Bib plays with an earnest zeal making its music a hot and tangy treat.