By MARK REDLEFSEN
October 6, 2012
Sign in to view read count 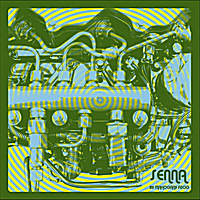 Mahogany Frog's Senna is named after the late Brazilian racing driver Ayrton Senna da Silva, who was also the recent focus of the British 2010 documentary film, Senna. The racing engine on the cover of the CD may be best-reflected in the energy of the music within. On its sixth CD, this four-man group based in Winnipeg, Canada has managed to expand their boundaries even further than their last release DO5 (Moonjune, 2006).

Mahogany Frog is not mired by category, although if one had to be made, it might be "post-progressive rock." The group is more sophisticated than post-rock bands like Mogwai and Tortoise, while incorporating a dose of the classic kraut rock of Can. Its brand of instrumental rock does not overshoot time signatures and rhythms, and is augmented by a strong electronic ethos. While there also a great deal of jazz inflection in its harmony, it always serves the group's rich, colorful and psychedelic tapestry. All that said, the music is not stiff, rigid or opaque. There is a very loose jamming feel that allows ebb and flow throughout the songs.

Swirling keyboards and slide guitar open "Houndstooth Part 1," leading into the Morse Code-like staccato of "Houndstooth Part 2." "Expo 67" has a tough, solid pounding sound of victory to it; every time it lets up, a warm wave of keyboards swarm in over the beat. "Flossing with Buddha" further increases the keys before leading into the CD's almost experimental progressive rock epic, "Message From Uncle Stan: Grey Shirt" and "Message From Uncle Stan: Green House," which has moments of a sort of overdriven Ennio Morricone western theme baked in. "Saffron Myst" lets the electronica straight in, reminiscent of European groups like Air and Cinematic Orchestra. The closer, "Aqua Love Ice Cream Delivery Service," ironically blows out like a battle scene, engulfed in a proper dose of buzzing laptop white noise, only to descend onto bed of eloquent harpsichord as an exit.