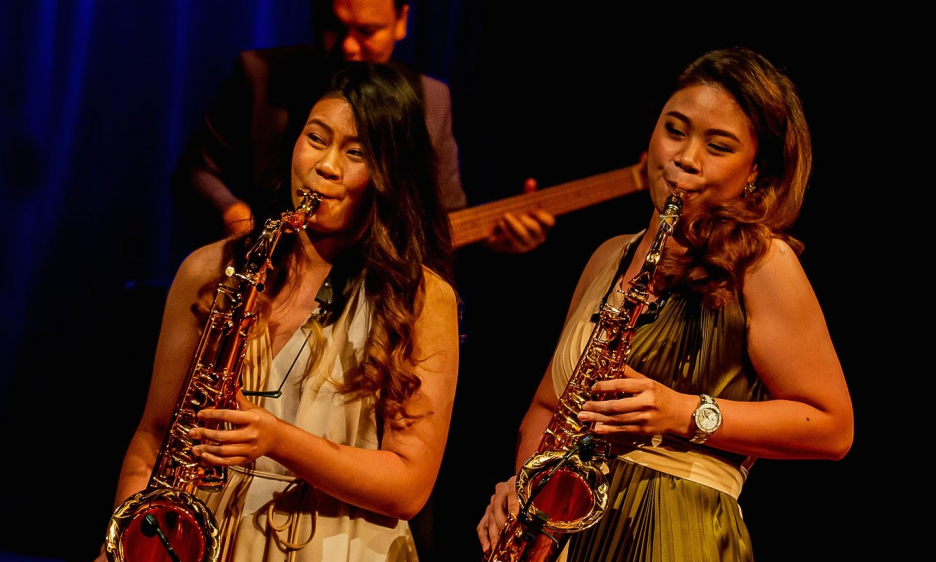 By PHILLIP WOOLEVER
August 5, 2019
Sign in to view read count

We also want to serve our community. It’s very important to give every inhabitant in our city the chance to meet new musical artists. &#151Deputy Mayor Willem Jan Stegeman

Immersed in a plethora of already known Western European performers, the Amersfoort Jazz Festival also provides Dutch audiences with multiple stages that nurture and introduce new acts while allowing many relatively younger artists to refine their repertoires. A key aspect of Amersfoort's four-day gathering is the JazzNL World Jazz Conference, involving music related diplomats from across the globe since 2012. JazzNL is a foundation that promotes Dutch projects and teamwork among international entities. Networking, collaboration and a shared, jazz-based vision combine for an inspiring experience.

Another admirable highlight is the Sena Jazz Laureates concert program, which began in 2017 and serves in conjunction with the conference. Sena, a performance and copyright organization handling contract-based business, is a foundation of the initiative offering great opportunities for lesser known players who've been striving for just such a break. Laureates are chosen through participating festivals, then invited to Amersfoort for the chance to share ideas and perform.

One of the first things to become apparent around the conference is the depth of attendee knowledge as musical experience and expertise is exchanged. The festival flourishes through feedback from highly varied programmers and putting it all together in Amersfoort involves admirable dedication to jazz formats on many fronts. New this year was the installment of a program committee, another step in global teamwork.

Australian Alex Hirlian was an example of the youthful mastery on display. He qualified for Amersfoort by winning the National Jazz Awards competition at the Wangaratta festival, where at twenty-four, he was the youngest entrant. Hirlian is a graduate of the Sydney Conservatorium of Music, where he met the members of his current, Arcing Wires project including Felix Lalanne and Yutaro Okuda on guitars, Nick Henderson on bass and Nish Manjunath on sax.

"Wangaratta focuses on different instruments every year, in a seven year cycle," explained Hirlian. "I knew the drum year was coming up and put a lot of effort into my entry around two years ahead. I did the songs I submitted all at home with a friend, there was one original, one blues song and a ballad. Of the ten people that got in, I was the youngest one accepted. When chosen I was in shock, I had to give a little speech and didn't have anything to say prepared because I didn't think I'd win. It's great to play at home but coming to Amersfoort is a very nice change in atmosphere compared to our usual crowds."

It was clear why Hirlian was chosen by the time the group's second song started. His timing and touch on the rims and high-hat was near perfect during three complicated time shifts and the follow up transitions. There were traces of acknowledged influences like Donny McCaslin , but most of the performance was freshly unique. Unfortunately, the hall's acoustics never allowed the twin guitars to meld as smoothly as they might have during the hour long set but the overall effect of the six- strings was still satisfying. Arcing Wires measures up well in the current landscape of progressive jazz and their first, upcoming album should be worth a listen.

Jason Eduwaiti, from the Suriname Jazz Festival, is a bassist who inspires comparisons to one of his stated inspirations, Richard Bona. Eduwaiti had a seemingly permanent smile all weekend as he shared the excitement and sense of artistic responsibility that was apparent in every Laureate winner.

"Suriname is a very small country. I am from the Saramaccan tribe. There are maybe 250 people in my village of Futunakaba. Rolf Delfos of the examining committee encouraged me while I was doing my Bachelor of Arts final. Jazz reached me in the jungle, that's the beautiful thing," he explained. Approximately half the Surinamese population resides in the Netherlands, which provided a hometown feel for Eduwaiti at his Friday night set. "At Amersfoort I got a chance to perform for thousands of people. It felt like the square was filled with Dutch people but there were also a lot of Surinamese people and it was really inspiring. It felt like I made it. The important thing for me is to develop. I got a big chance to develop myself and show what I can do."

Eduwaiti appeared with the Holland-based band DelMontis, who backed his five-string ax with trumpet, drums, a majestic old Hammond keyed by vocalist Frank Montis and a pair of saxophones, one manned by Eduwaiti's long time supporter Delfos, who shared a fine duet. Their Sunday afternoon show opened with twin Ray Charles classics, "Georgia" then "Mess Around," bursting with gospel-tinged enthusiasm and technique that quickly proved well beyond cover band territory. Eduwaiti's originals like "Make It Right" covered the rest of the hour long set with further soulful influence. At times the influence of Bona's imprint was evident but for the most part Eduwaiti is very much his own bass man. "I'm an Indian Too" raised the groove level and got the audience moving, and "Limbo" had audience gleefully helping out on vocals. Eduwaiti has already secured a fan base in Holland, it shouldn't be too long before that territory expands.

SaXPackGirl, an entry from Thailand's Huahin Jazz Festival, raised a joyful noise at Theatre de Lieve Vrouw (roughly translated that's the Sweet Woman Theatre, a designation that fit the visiting reed players perfectly). Delightful front-women Kwang Nisthanun Thaicharoensri and Pang Pacharee Sa-guanprasert, on alto and tenor respectively, were as polished as their horns, which seemed to glow. Maybe that was a reflection of absolutely joyful stage personas, which quickly engaged the smiling assembly, through impeccable dual timing and precision delivered with obvious delight. The duo's heartfelt comments on personal history and their upbeat synergy connected with listeners on songs like "Sister" and "Strained in Weakness." The familiar "Pick Up the Pieces" was spiced with alternating solos and some nice twists. When "Dream Town" was dedicated to Amersfoort, the audience's bonding was complete.

The ladies' Youtube channel claims plenty of homeland views, but video doesn't come close to conveying the charm of their live show. Even a cynic anticipating clichés from their somewhat glitzy appearance was quickly converted by the band's effectively earnest efforts. Excellent backup was provided by the Takeshi Band, a solid outfit featuring Puttikorn Wittayarat on guitar, Sompop Praesangeiam on drums, and bassist Wichudes Netsin, joined by frequent French collaborator and very able keyboardist Frank Herrgott.

A Russian entry from Usadba Jazz, the Dimitry Ilugdin Trio, opened Saturday afternoon's festivities with an excellent set at the outdoor Greenmarket stage. Like many of the festival venues, "Groenmarkt" sits amidst café surroundings that made for a very comfortable listening environment. The sun had just peeked out through the morning clouds before the band, with drummer Peter Ivshin and bassist Victor Shestak, exchanged a peppy group hug and headed up the oval shaped outdoor stage, surrounded by bar tables and freshly sprouted greenery. Although many people were eating, drinking or placing orders the sound remained surprisingly clear and uninterrupted. Maybe the trees made a difference. The trio drew a curious crowd from crowded shopping streets nearby and frequently diverted shoppers' transient attention, as evidenced by the growing number of people who gathered to nod their heads around the venue while Ilugdin dazzled them with some serious pinky action on the keys.

Festival flyers noted a focus on pianos, and Ilugdin certainly held up their end of that demographic. During a set of mostly hard-driving originals, the standout ballad "January" slowed the tempo but not the energy, including a captivating solo by Shestak. The extended suite "Charisma" caused people to exchange enlightened glances and the rocking climax had many folks pounding the wooden tabletops in approval. "Home" might have been written about a location far away, but the Russians found chords to make Amersfoort feel like that special place for everybody.

Romania's JazzyBIT, a trio featuring Teodor Pop on keys, Szabo Csonger-Zsolt on drums and Mihai Moldoveanu on bass, represented Brasov Jazz and Blues. Their appearance involved serious last minute hustling just to make it to the stage, but there was not even a hint of jet lag in gigs featuring powerful improvised fusion and pieces from Horizon (EM 2016). Some of the segments brought GoGo Penguin to mind, but there was nothing derivative to be heard and the fact JazzyBIT played immediately after rushing into town was powerful proof of their readiness.

"We flew from Timișoara, our hometown, to Bucharest for a connecting flight to Amsterdam," reflected Pop after a mid-day Sunday set. "The connecting flight was canceled because there was an issue with the airplane's cabin pressure system, and we were told that we might get another flight only the day after, which would have meant missing our first gig. But we were lucky and got a flight on the same day, so we rented a car and drove to the sound check. We arrived an hour before our gig, not being able to rest a bit or have dinner. But we were very happy that we made it, many people from our (original) flight were not able to get a connection, so thanks KLM! We got the opportunity to see a fantastic city and were really impressed with the vibe and the people."

For an approving audience it may have been just another easy transition from concert to concert in Amersfoort, but for the Romanian visitors it was another topsy- turvy day in a musician's life.

This year's other laureates were comprised of the Cazzip Project from Yeldegirmeni Jazz Spring in Istanbul, vocalist Wanda Baloyi from Joy of Jazz in South Africa, Brazilian guitarist Arthur Endo from the Assad Festival, and Hungary's Akos Fekecs Project from Babel Sound. Claire Parsons from Luxembourg Jazz Meeting appeared in a duet with Israeli guitarist Eran Har Even and drummer Sun Mi Hong, an Amsterdam transplant initially from South Korea, performed with her popular quintet as the representative of the hosting Amersfoort Festival. The entire agenda was truly an international treat, and even without the general lineup's other dynamic acts over the weekend, these relative newcomers made for a scintillating lineup.

"What's great is the opportunity for young, starting musicians to perform in an inspiring environment," said Deputy Mayor Willem Jan Stegeman. "They can meet experienced musicians, observe and learn from them. We also want to serve our community. It's very important to give every inhabitant in our city the chance to meet new musical artists."

Amersfoort quite obviously upholds that philosophy as a community cornerstone, and the abundantly apparent results reward both locals and tourists at a vibrant festival. It's no wonder that throughout the weekend so many visitors could be overheard saying they definitely planned to return. After all, anyplace with so much new talent to be discovered is always a prime destination.