By DAN MCCLENAGHAN
January 15, 2006
Sign in to view read count 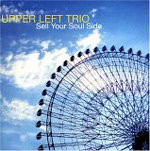 Comparisons fly all over the place when writers try to describe the sound of an emerging pianist and his trio. From the percussive side the newcomer might get paired with Bud Powell, to use a past master, or McCoy Tyner, if we're going with a current player. On the other side of the spectrum there seem to be a lot of "young Bill Evanses" out there, a bunch of guys who fall into the Brad Mehldau/Fred Hersch camp. But in the end, it comes down to individualism, and the piano—plus its interplay with bass and drums—is an especially succinct vehicle for channeling the collective soul of a trio.

Having said that, the Portland, Oregon-based Upper Left Trio, with a previous Origin records release, Cycling, and now with Sell Your Soul Side, has devolped its own individual voice, falling about midpoint between the bombast of the Bad Plus and the intospective musings of Brad Mehldau.

Take one tune to highlight the trio's style: the Clay Giberson-penned "She Casts No Shadow" begins with an understated and pensive mood and gradually—over eight and a half minutes—builds in momentum on the foundation of Jeff Leonard's electric bass and Charlie Doggett's crisp, tight drum work, before Leonard takes a solo with electric muscle, with Giberson comping poetically, Bill Evans-like, behind him, a waning of momuentum that cranks up again under drummer Doggett's sticks.

"Comrade Camenzind" opens in a dark mood, Giberson floating over the keys before he nails down a small statement then flirts with abstraction as Doggett nails down a metronomic time and bassist Leonard looms with big beefy notes; and when Leonard solos, Giberson goes into a graceful, flowing, trance-like trilling comp, an eerily gorgeous interlude that leads back into the lyrical melody.

Pianist Giberson penned five of the tunes here, and bassist Jeff Leonard wrote three more. Slip in a Joni Mitchell tune, "All I Want," and you've got a first-rate set of lyrical melodies that have stories to tell in an always engaging voice.

Heads or Tails; All Want; Sell Your Soul Side; She Casts No Shadow; Comrade Camenzind; This is Where I Find Peace; Not to Decide; Reason to Change; Prayer.