By JAKOB BAEKGAARD
January 26, 2009
Sign in to view read count 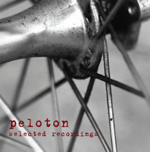 There's a common perception of Norwegian jazz that links it to the Nordic sound: a cool, melancholic aesthetic propagated by the likes of Jan Garbarek, Helge Lien and Tord Gustavsen. The Rune Grammofon label has, however, brought a new strain into Norwegian jazz that has made it possible to disturb the image of icy mountain music in favor of a more wildly eclectic, experimental music.

While it is true that Peloton's Selected Recordings isn't released on Rune Grammofon, the record would have been unthinkable without the label that allowed Norwegian jazz to think outside the box of a closely defined sound and genre.

The title is fitting because it speaks to the eclectic approach that is at work in the music. From the slow electro-fusion groove of "Aranburu," with lazy horns playing in unison, to the wistful country-jazz of "Isidro," garnished by moaning lapsteel and bubbling Moog, to the chaotic free jazz explosions of "Rippol," Peloton refuses to be pinned down by genre.

The danger of such a devouring musical appetite is that the album can become an incoherent grab bag of sounds that goes everywhere and in the end nowhere. Fortunately, this doesn't happen with Peloton largely due to the abilities of Karl Stromme (trumpet, synth), Hallvard M. Godal (saxophones), Petter Vagan (guitar, lapsteel), Steiner Nickelsen (Arp, Oberheim, Moog) and Erik Nylander (drums) to create their own sound: a groovy space-age jazz with the simultaneously futuristic and anachronistic Moog taking a crucial role in the band's architecture of sound.

What matters is also that the band not only manages to combine the different sounds into a whole but also slides convincingly between moods, thus being able to shift from the energetic groove and soaring trumpet of "Nozal" to the ethereal, low-key ballad "Munoz."

Normally, a title like Selected Recordings would be reserved for a retrospective album that gathers the best of an artist into a convenient package. This album is also a "best of" but it is of a different sort. Peloton are at the beginning stages of their career yet they're already making the sounds that define them as artists. Thus, this is an album that both looks back and ahead. If Selected Recordings is a sign of things to come then there is reason to be thrilled about the future.