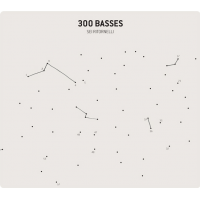 The credits of Sei Ritornelli require some explanation, in order to avoid confusion or unrealistic expectations. Firstly, formed in 2010, 300 Basses is a multinational trio consisting of the Portuguese-born Alfredo Costa Monteiro, Jonas Kocher from Switzerland and Italian Luca Venitucci. Contrary to the mind-boggling images conjured up by the group name, all three play accordion; no-one plays bass. The album title, like the track titles, is in Italian and translates as "six refrains." In fact, the six pieces are all improvisations and so, good as they are, there is no sign of a refrain in any of them. The six were recorded live in November 2011, during the trio's residency at L'Arc Romainmôtier in Switzerland; none of them is prolonged, the shortest lasting under five minutes, the longest under eleven.

The three players manage to extract a range of atypical sounds from their accordions. So, the opening track "Fuoco Fatuo" starts with some very low frequency tones that could almost be from double basses, but are not. The three interact well, layering their sounds to produce a relaxing soundscape that has both depth and detail, all underpinned by those bass drones. The spell of that opener is soon broken by the discordant intro to "Abbandonato" with its sustained screeches, reminiscent of feedback, which creates a wall of noise. As with any good noise piece, within that barrage there is a lot of small detail that reveals itself over repeated listening, so that it never seems repetitive or monotonous.

ADVERTISEMENT
"Gira Bile" brings further contrast, being totally different again to the preceding tracks. It is constructed from overlaid chords which create a pleasingly harmonious and constantly evolving piece. As well as accordion, Monteiro and Venitucci are both credited with playing "objects," and percussive sounds that contrast with the sounds of the accordions may be evidence of that. "Mala Carne" is another noise piece which starts with all three players full on and builds from there; its sounds range from sustained drones to staccato percussion, all combined together sympathetically. "Maledetto" again belies the fact that the source of the music is primarily accordions; it would be far easier to believe that its high pitched whines originated from laptops, yet the album credits make no mention of electronics. Whatever their source, the dominant impression left by the sounds is how well they fit together into a coherent whole. The same is true of "Fantasma" which brings this rich and varied album to a satisfying conclusion.