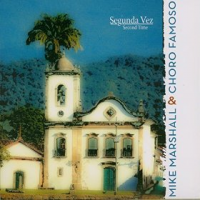 Segunda Vez comes a decade after this group's eponymous debut—a forty minute album featuring quintet and septet performances. Here, mandolinist Mike Marshall expands the length and breadth of the work while contracting the size of the group; all seventeen tracks on this seventy-plus minute program feature the same quartet—Marshall on mandolin, Andy Connell on clarinet and soprano saxophone, Colin Walker on 7-string guitar, and Brian Rice on pandeiro and other percussion.

On the surface, Segundo Vez is a mostly cheery and gleeful trip through a style of Brazilian music that dates back to approximately 1870. But a greater truth is revealed with some deeper digging: This album is actually a historical survey course on the history of choro music and its chief compositional architects and proponents. Marshall doesn't program the music chronologically, but the detailed liner notes accompanying this album trace the rich history of these men and the music they made.

The oldest piece on the album—"Tenebroso"—was written by Ernesto Nazareth, arriving a full century before Marshall and company took to a California studio in 2013 to record this album. On the other end of the timeline are pieces by latter-day composers like Mauricio Carrilho ("Alumiando") and Guinga ("Sete Estrelas" and "Cine Baronesa"). In between, Marshall covers everybody from Pixinguinha to Jacob do Bandolim to Moacir Santos.

The album-opening "Bole Bole" is one of many numbers here that speak to the peppy and pleasant feelings which many associate with this style of music. But this album isn't all sunshine and gaiety. A controlled sense of classicism shines through during "Sensivel," wistfulness wins out on the gently moving "Paraiso," and slowly flowering beauty is at the heart of "Flores." Marshall does a fine job balancing all of these different moods throughout.

While this album is completely tied into the whole history of choro music, it isn't a museum piece. Marshall may look back across the ages on this one, but he views the music through a modern lens, creating something timeless and timely in the process.