By JEFF DAYTON-JOHNSON
July 4, 2010
Sign in to view read count 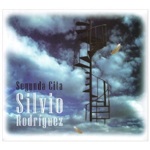 Jazz fans will be familiar with Cuban singer-songwriter Silvio Rodríguez as the composer of "Rabo de Nube," a musical air of impossible loveliness highlighted as the title track of a