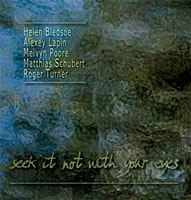 Pianist Alexey Lapin, tenor saxophonist Matthias Schubert and tubaist Melvyn Poore planned a trio date at Cologne, Germany's The Loft, on June 28, 2009. With percussionist Roger Turner in town, the trio became a quartet, and then flautist Helen Bledsoe sat in for a second set of two tunes. The original concept may have changed, but the direction the evening took did not. All of the music was improvised, except for "Can't Catch the Name," which took flight from a melody written by Lapin.

All five players are improvisers, ready to turn an idea into a germane presence in an instant. A wisp, a fragment, a note floating hazily in the air is harnessed and turned into vital conversation. Time is controlled by space as significantly as it is a stream of interaction.

Lapin, playing live outside his native Russia for the first time, sets up "Per Aspera," a line of protracted notes turning into a well of melody complemented, at first, by Turner, before Schubert and Poore come in. What transpires is an eddying whirlpool of sound, the instruments comingling, even as they voice their individuality. Strangled squiggles of saxophone weave through the piano notes before straightening into a melodic progression, with euphonium providing a backdrop of smooth linearity. The communication is symbiotic.

Bledsoe gets right into the feel, opening the path to "Little Ways to Perceive the Invisible," a roiling combustion that textures the fabric. The undercurrent surges, the instruments cross, cutting and igniting a marvelous storm of fertile ideas. Throbbing patterns are stimulated by a constant sense of urgency, and while the high kicks in and locks; the pattern never stays the same. The chiming piano chords, percussion's tinkling, horns' crying and flute's airiness are also tangents in the frame.

All the music reverberates to capture the imagination.

Per Aspera; Can't Catch the Name; Blur/Fanfare for the Rational Man; Little Ways to Perceive the Invisible; Animated Beings.