By JIM TRAGESER
December 27, 2016
Sign in to view read count 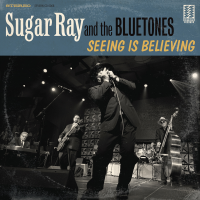 Possessed of a rich timber on both vocals and harmonica, a keen ear for melody, and an unerring feel for the blues, New England's Sugar Ray Norcia had the grand career misfortune to begin breaking nationally just before the pop punk band Sugar Ray came on the scene and sowed confusion among music fans.

But Norcia has persevered, carving out a niche for himself on the blues circuit—festivals and cruises and night after night in clubs.

Norcia's latest release is another delight of after-hours jazz-tinged harmonica blues. While his website touts Norcia's ability to switch styles—citing Chicago blues, Kansas City swing, and swamp blues—the fact is the band doesn't switch styles so much as incorporate all those styles into one musical stew. There is a consistent groove to his new album -not the hodge-podge of a buffett.

And his band, the Bluetones, is a huge reason Norcia can take in so much musical territory. The lineup on this CD is an all-star combo of New England blues: "Monster" Mike Welch on guitar, Anthony Geraci on keys, Michael "Mudcat" Ward on bass, and Neil Gouvin on drums. Geraci, Ward and Gouvin have been together as Norcia's backing combo for more than a quarter-century, during which time they've pulled double duty behind Ronnie Earl as The Broadcasters.

Like Earl, Norcia is capable of taking full advantage of that powerhouse band's skill set.

Where Seeing Is Believing falls perhaps a bit short is in the caliber of the songwriting. There is no instantly memorable song on the new collection, nothing to get stuck in your head. They're all original songs, with everyone but Gouvin contributing at least one composition.

The best of them is Norcia's "Blind Date," a driving blues with a bright arrangement delivered in a West Coast vein. Another gem is Geraci's "Noontime Bell," featuring a modest hook, and "Not Me" (Norcia) is a touching dirge.

If some of the songwriting is average, the playing always elevates the material.

The album starts off with a Welch original, the muscular "Sweet Baby," a mid-tempo blues on which Welch gets an extended solo at the midpoint—exhibiting a tasteful restraint not evident on his own early recordings. On "Two Hundred Dollars Long," Geraci and Welch comp sympathetically behind Norcia's harp—providing tasteful fills that draw on historic blues motifs while also informing these familiar themes with new twists. It is a remarkable combination of inspiration and knowledge, creativity and stylistic fealty.

It is the sound of skilled masters doing what they love.

Sweet Baby; Seeing Is Believing; Noontime Bell; Keep on Sailing; Blind Date; You Know I Love You; Misses Blues; It Ain't Funny; Not Me; Got a Gal; Two Hundred Dollars Long; It's Been a Long Time.