SVIN: Secretly We Are Gay 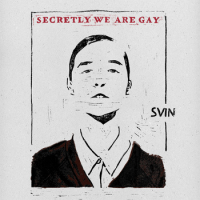 The Danish quartet SVIN sees its mission to "create a greater genre diversity in a world where the music industry's cash register sets the agenda." In its rebellious musical universe this band find inspiration in the manic aggression of Sonic Youth, mixing it with the fragile, celestial compositions of Arvo Part and spicing it with African polyrhytmics.

Svin was founded in 2008, released its debut, Heimat in 2010 and 2012 recorded its sophomore album, a limited edition 12" vinyl with four songs. The title, Secretly We Are Gay refers to "the beauty inside us all which we often keep to ourselves, out of fear of breaking the mainstream."

The first song, "How Deep Is Your Love" (not related to the Bee Gees hit with the same title), is a catchy song that surfs on the power-punkish chords of guitarist Lars Bech Pilgaard and ignites the reeds of saxophonist Henrik Pultz Melbye and marching baritone horn player Magnus Bak. "Fasanens Død" is a much more ambitious composition, an enigmatic cinematic texture, rich with nuances. The emphatic and reserved interaction between the breathy tenor sax of Melbye and the deep baritone sounds of Bak colors its atmosphere in dark shades. "Glatnakke" is a metallic assault from its first to its last second. The pounding drumming of the ever-energetic drummer Thomas Eiler set the course for the screaming reeds and the jangled, aggressive guitar lines. The last song "Frøken Frank" follows with similar spirit and energy, only in a slower pace.

Less than 20 minutes, but all wild and weird and none even remotely close to the mainstream.