By GLENN ASTARITA
September 18, 2008
Sign in to view read count 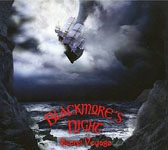 For several years, famed Deep Purple guitarist Richie Blackmore has been assimilating the sounds of enchantment via Euro-folk, Baroque and medieval thematic forays. But the qualitative component is steeped within the ensemble's Renaissance rock-based stylization. With its seventh studio release, the band surges onward via the delightful Secret Voyage, featuring the angelic and numinous vocals of Candice Night. And while these classy arranged pieces might ordinarily denote austere frameworks, the musicians emerge as prophets of good cheer throughout.

On "Locked Within The Crystal Ball," drummer Squire Malcolm of Lumley executes a rumbling rhythmic pattern that signals a tuneful and up-tempo rock pulse in support of Night's wistful vocals and Blackmore's resonating electric guitar lines. The entire album is engineered upon an acoustic-electric methodology, where Blackmore renders a potpourri of British folk and classical acoustic guitar parts amid the keys, violin and rhythmic foundations. On the flip side, the group morphs Elvis Presley's pop hit, "Can't Help Falling In Love," into a thrusting and rather profound rock groove. However, the amalgamations of various European folk derivations prevail as a recurring parameter throughout the entirety of the album. Blackmore does let it rip in spots, but tones it down and mans the flow when required. Entertaining, heavenly and uplifting are just a few of the descriptors that convey the band's ongoing legacy.