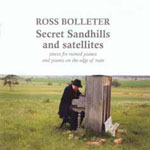 For the uninitiated—which includes most of us, I would guess—this album is at once intriguing, fascinating and educational. Subtitled "for ruined pianos and pianos on the edge of ruin, it features Ross Bolleter, co-founder of WARPS (World Association for Ruined Piano Studies), who recorded all of these pieces on ruined pianos at locations in his native Australia. (All of these pieces were originally released on CD-R by WARPS.)

In his extensive sleeve notes, Bolleter writes that a piano is Ruined (rather than Neglected or Devastated) when "it has been abandoned to all weathers and has become a decaying box of unpredictable dongs, clicks and deboomps, with not a single note (perhaps excepting D) sounding like one from an even-tempered upright piano. Sometimes you push down one key and five or six others companionably go down with it, making for a surprise cluster and swathes of harmonics singing forever. The notes that don't work... are at least as interesting as those that do.

At one time there were reportedly some 700,000 pianos in Australia, when the population was barely three million, so it is maybe unsurprising that there are so many ruined pianos to be found there. Bolleter's description makes it sound like they are everywhere in Australia—like dead cars or fridges elsewhere (certainly in London!).

The sound of these ruined pianos is often very close to that of a prepared piano, with their occasional unpredictable thuds and clangs. In a sense, they are prepared pianos, but the preparation has been natural (by the elements, flora and fauna), not man-made. When Bolleter includes real tracks of prepared piano, such as "Going to War Without the French Is Like Going to War Without an Accordion and "Time Waits (the latter studio-recorded on a prepared Yamaha Grand), they fit seamlessly into the flow of the album.

Bolleter certainly manages to extract the most from these ruined pianos, and he uses the results to produce music that is compelling and evocative. He frequently plays two instruments simultaneously, also supplementing the ruined pianos themselves with accordion, percussion and sound effects. By far the longest and most substantial piece here is "Secret Sandhills, at over 28 minutes. Unusually for music on Emanem (a bastion of improvised music), it is a constructed piece, the result of editing together Bolleter's playing on six different ruined pianos in six different locations, each with its own unique sound and idiosyncrasies. (Bolleter details some of the history of each one. For example, "Originally the bar piano from the Big Bell Hotel. Subsequently the Ruined Piano at Nallan Sheep Station, near Cue, 700 kms NE of Perth, Western Australia. Priceless stuff.) The end result is an entertaining and varied sound collage.

Highly recommended—not as a novelty, but as a unique listening experience.

Secret Sandhills (in memory of Timmy Payungka Tjapangati c1940-2000); Axis; Dead Marine (for David and Carol Kotlowy); And then I saw the wind