By JACK BOWERS
December 3, 2015
Sign in to view read count 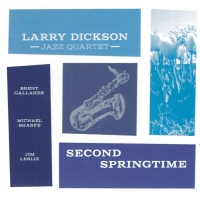 On Second Springtime, baritone saxophonist Larry Dickson, a mainstay for more than three decades with Cincinnati's renowned Blue Wisp Big Band, leads a quartet sans piano, much like Gerry Mulligan's groundbreaking ensemble from the early '50s. Unlike Mulligan's storied quartet, however, Dickson shares the front line not with a trumpeter (Chet Baker) but a tenor saxophonist (Brent Gallaher). How does that work? Quite well, actually, thanks for the most part to the singular talents of Dickson, Gallaher, bassist Michael Sharfe (another Blue Wisp sideman) and drummer Jim Leslie who work well individually and as a team.

While following Mulligan's path in terms of group structure, Dickson's deep, resonant, almost vibrato-less sound is more akin to that of Cecil Payne, Nick Brignola or Pepper Adams (one of whose songs, "Bossa Nouveau," appears on the menu). Gallaher, for his part, reminds one of such post-bop masters as Eric Alexander, Grant Stewart or the superb Dutchman Ferdinand Povel. Sharfe is a low-register anchor, Leslie an alert and steady timekeeper. If there are any missteps along the way, they are imperceptible.

Eight of the album's eleven numbers are performed by the quartet. Dickson has a ballad feature ("What Is There to Say?"), as does Gallaher (Duke Ellington's "Warm Valley"), and Dickson performs the last selection, the fugue-like "Wedding Song," by himself, overdubbing four baritones. Besides "Wedding Song" (composed for his wife, Melissa), Dickson also wrote "Bandwich Blues," "FOMO" (Fear of Missing Out), the buoyant "Paging Bettie" and animated "Kiger Rag" (in memory of trumpeter and friend Al Kiger). Rounding out the handsome program are Freddie Hubbard's jazz waltz "Up Jumped Spring" (wonderfully introduced by Sharfe), Thelonious Monk's rippling "Bright Mississippi" and Charles Mingus' playful "My Jelly Roll Soul."

After listening to and savoring Second Springtime, the immediate impression is that Dickson and his mates should do this more often. Listening again, that opinion is only reinforced. Dickson leads a splendid quartet, so engaging that, much like Mulligan's, one scarcely notices the absence of a piano.