By EDWARD BLANCO
February 27, 2009
Sign in to view read count 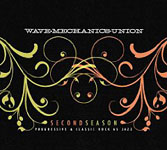 One of the most unusual jazz albums to burst on to the scene has to be Second Season, from the Wave Mechanics Union, a creative collaboration formed by trombonist Ryan Fraley, drummer Ralph Johnson, and vocalist Lydia McAdams. Though billed as a jazz recording, the origins of the music are taken from the progressive and classical rock genres. The music is tastefully restated with jazzed up arrangements and performed by a modern big band lending a new and jazzy read to songs from legendary rock bands such as The Who, Queen, Led Zeppelin, Pink Floyd, The Beatles and Yes.

Unlike standard jazz recordings that focus on traditional melodies and re-record worn out standards drawn from this rich American jazz heritage, the repertoire here takes selected rock tunes that have been around for decades, after all, rock music is now more than fifty years old. Supported by a cast of twenty musicians, plus a string quartet, McAdams is well accompanied on eight vocal tunes, opening the disc with Peter Townsend's "Won't Get Fooled Again," backed up by lively woodwinds and a splendid piano solo from John Kessler on a song that rumbles on quite well.

Arranged by Fraley, one of Led Zeppelin's signature tunes "The Rain Song," is given an even more mellow treatment than Robert Plant and Jimmy Page originally delivered featuring tender play from Don Smith on the flugelhorn. McAdams turns in a formidable performance on other vocal number like on "Available Light," a song from the Rush repertoire, and on Sting's light ballad piece "Why Should I Cry For You."

Not all of the selection are vocals, there are two fine instrumentals and they begin with a very jazzy interpretation of Pink Floyd's "The Great Gig In The Sky," led by Robert Stright on vibes; and The Beatles "Eleanor Rigby." John Lennon would be pleased with what Ralph Johnson does on the latter tune, refining the music and transforming the tune into a classical number that employs the strings and the full measure of the band's powerful play.

Second Season offers something brash and new that breaks the mold for standard jazz providing a revved up big band flavor to progressive and classical rock. The perfect album for those who still appreciate the sounds of rock music, but who now prefer the embrace of the more mature music of jazz, with this recording, it is quite possible that one can have the best of both worlds.

Won't Get Fooled Again; Killer Queen; The Rain Song; The Great Gig In The Sky; Available Light; De Do Do Do, De Da Da Da; Eleanor Rigby; Why Should I Cry For You; Elephant Talk; Istanbul (Not Constantinople); Heart of The Sunrise.