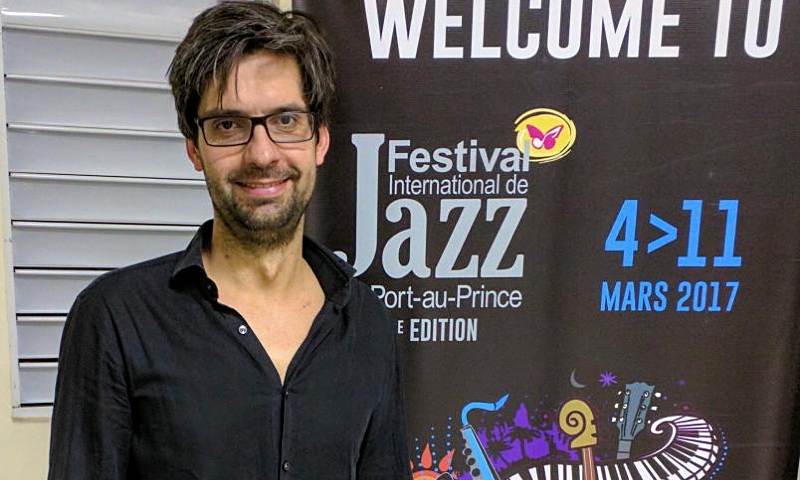 By MARK SULLIVAN
July 8, 2017
Sign in to view read count
German pianist/composer Sebastian Schunke began studying classical piano at age six. When he started learning jazz at age 12 he was quickly exposed to Latin jazz, and there was no turning back. He moved to New York City in 1996 (age 22) and divided his time between the Manhattan School of Music and immersion in the Latin jazz scene. There he was able to work on learning an authentic Latin feel while also integrating his European experiences.

In 2000 he moved to Berlin and finished his jazz education at the Conservatory of Music "Hanns Eisler." Since then he has established his Berlin Quartet (bassist Marcel Krömker, drummer Diego Pinera, and saxophonist Dan Freeman) which is featured on his album Life and Death (Timba, 2011). He has continued to record with other players, including a notable session with Paquito D'Rivera and other NYC musicians on Back in New York (Timba, 2008). His latest album Genesis, Mystery And Magic (Nwog Records, 2014) includes a mix of international and New York City musicians.

This interview was conducted in Port-au-Prince, Haiti after the second of two exciting performances by the Berlin Quartet at the 2017 Festival International de Jazz de Port-au-Prince.

All About Jazz: Where did you grow up, and when did you start playing the piano?

Sebastian Schunke: I grew up in a very little town near Hanover in Germany, and I started the piano at six years. I had classical training, and then at 12 years I departed from that for jazz training. That jazz teacher really liked Latin jazz, so from that point on I was already really going to the rhythms of Latin America for inspiration.

AAJ: That was going to be my next question! So your teacher got you on that path early. What did he expose you to when you were learning?

SS: He loved Eddie Palmieri at the time, Eddie Palmieri in the '80s was very big. So I checked out all his CDs, and Gonzalo was there coming up, and I checked what Gonzalo did [onstage Schunke described opening for Gonzalo Rubalcaba earlier in the festival as "a dream come true"]. That was my first teacher: he gave me that path, and I followed it.

AAJ: Speaking of those influences, how did the Back in New York date with Paquito D'Rivera happen?

SS: I moved to New York to study jazz. I was shy to be honest, because I came from a little town, and I thought, "I can't do Latin jazz, I'm not Latin." Then I met John Benitez who played at that time with [Michel] Camilo, and he liked the music a lot, and so he made the first session. There I met Antonio Sanchez and that was my first CD (Symbiosis, 2002). So it started, and then I went back to Berlin. My record company, they showed by coincidence one of my CDs to Paquito, and Paquito told them "I want to make a CD with this guy." And then he asked me to make seven compositions so we could have a CD together, and we recorded it in New York with John Benitez again, and Antonio Sanchez. That was nine years later, after the first CD.

AAJ: Did Paquito choose to play clarinet on it, or was that your idea?

SS: It was my idea. I love his clarinet playing, I'm really addicted to it, and I thought it would fit perfectly to my sound, to my tunes, and that was my decision.

AAJ: He's a wonderful clarinetist, even though a lot of people don't think of him that way. Let me ask about your Berlin quartet. I notice you've done a lot of your recordings with other players, but are they your working band?

SS: I made one CD with them, and Diego, the drummer is also on my last CD. That's my working group. I played a lot with them, we all live in Berlin, we've done a lot of tours together. We get along very well musically, we've been together now eight, actually nine years.

AAJ: That's a long time to keep a band together in jazz these days. Last question: what are your future plans, what's happening next?

AAJ: Looking forward to it!