By ANDREW VELEZ
December 14, 2008
Sign in to view read count 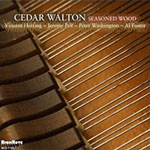 Seasoned is an apt term for Cedar Walton who, at 72, continues to dazzle, refresh and satisfy with his keyboard artistry. Among several of his compositions included in Seasoned Wood, "Clockwise" is a bit of unusual waltz-time magic from which gradations of application spill from his keyboard, chiseled and burnished, as drummer Al Foster lends dazzling accompaniment. Their interaction is typical of Walton with this group, in which, as with the best bandleaders, he surrounds himself with stalwarts who shine brightly while at the same time creating a well-integrated ensemble.

His savvy is hardly surprising after all the decades he has spent with the likes of Milt Jackson, Art Blakey, Clifford Jordan and his earlier groups including Eastern Rebellion and the Timeless All-Stars. On Walton's "When Love Is New," Jeremy Pelt's flugelhorn provides a haunting counterpoint to the leader's crisp ruminations that evokes echoes of Miles David in its totally engaging unsentimental poignancy. A Jimmy Heath beauty, "Longevity," finds Walton's backing of alto saxophonist Vincent Herring and Pelt's down-front solos to be as bracing as it is spare.

Among the older classics included is Gershwin's "The Man I Love." Here the group swings so mightily the sound is simply massive. The whole becomes much more than the parts, notable for the white heat blowing of Herring, with whom Walton has collaborated for over 15 years. Here and throughout the session is Walton's hard-driving delicacy, mixing bop, brilliant phrasing, harmonic variety and more into his totally distinctive and evergreen style.

The Man I Love; Clockwise; Longravity; When Love Is New; Hindsight; A Nightingale Sang In Berkeley Square; Plexus; John's Blues.