Scott Reeves's Shape Shifter (Miles High Records) is one of the year's pleasant surprises. Recorded live at Cecil's Jazz Club in March of 2008, the disc succeeds on a number of levels. Reeves's compositions are varied and substantial, ranging from hard bop and Latin oriented themes, to clever jazz-funk, to a French impressionist influenced piece, to a low key blues. His arrangements are restless, full of color, and provide ample solo space for all hands amidst variable underpinnings. In addition to the leader's alto flugelhorn and alto valve trombone, the record features tenor saxophonist Rich Perry, pianist Jim Ridl, bassist Mike McGuirk, and drummer Andy Watson. They are all keen interpreters of Reeves's music as well as eloquent soloists. 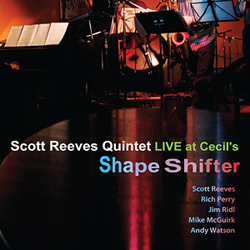 The recording set a high standard for the quintet's return to Cecil's. Friday night's opening set was comprised of two selections from Shape Shifter, a pair of the leader's compositions off of his previous release, Congressional Roll Call, as well as Reeves's arrangement of a favorite from the American Popular Songbook.

You couldn't help but notice a photograph of the late pianist and educator James Williams looming large on the wall next to the bandstand. A friend and colleague of Reeves, Williams played on Congressional Roll Call. Reeves's tribute, "The Soulful Mr. Williams," opened the set in fine fashion. As the rhythm section locked into a slow-to-medium groove reminiscent of the classic John Coltrane Quartet, the leader—on trombone—took the first solo. Exemplifying a mature style, Reeves's tightly plotted narrative took many small twists and turns. Booted by Watson's extroverted bass drum, a few simple blasts hung in the air. A bright, singing melody turned muddy. Three notes joyously leapt from the horn, and a four note phrase was obsessively repeated.

Andy Watson was the catalyst throughout "Pedacinho do Brasil." On the head he nailed the lively Brazilian feel by bending strokes to the mounted tom-tom and moving the time keeping between a closed hi-hat and the ride cymbal. His tom-tom hits deftly moved around the punchy phrases of the leader's alto flugelhorn solo. Watson's bass drum answered Ridl's mixture of single notes and chords. The sensible pounding of the drummer's solo wasn't overdone as he worked the entire set with an array of Latin rhythms. For awhile the pace was set by the bass drum's repetitive, heartbeat pattern.

A jagged, bebop oriented line taken at an up tempo, the head of Reeves's "Congressional Roll Call" left plenty of space for the rhythm section to fill. During the solos Ridl, McGuirk, and Watson moved between intermittent support and straightforward swing. Perry's improvisation was a long, somewhat convoluted journey. As the band simmered beneath him, the tenor saxophonist offered low key thoughts and then slowly began to cut. After playing some long clarion calls, he briefly moved into the horn's lower register. Phrases became harder and more insistent, and often they shoved against the steady pulse. Instead of building to the anticipated climax, Perry took things down a notch, phrasing in a more levelheaded, conventional manner.

Ridl's solo successfully pulled together a variety of segments in which the melodic and rhythmic elements were of equal importance. Starting out in a somewhat distant reverie amidst the sparse bass and drums, he let each note ring. Explicitly stating a slow steady pulse, he developed a probing, funk-like line. When McGuirk and Watson picked up the beat, Ridl stayed at the higher end of the keyboard, spinning long, dizzying chains of notes.

Everyone save Watson spoke their peace on Reeves's ballad "Remembrances." Accompanied by Watson's brushes, McGuirk evinced a nice fluid movement while finding things to say in the instrument's lower range. Always staying in the spirit of his composition, Reeves's alto flugelhorn moved between pointed blasts and thoughtfully developed melodies. Perry's tenor consistently danced slightly ahead of the rhythm section. Ridl tentatively picked out a few single notes and a couple of chords, paused, and then launched a long, sparkling run.

One of the many pleasures of Shape Shifter is the band's ability to move seamlessly between funk and straight-ahead jazz during the title track. Something similar happened on "All Or Nothing At All," the set's finale. Perry waxed hard and brittle over the boogaloo foundation and exhibited a nice even flow of ideas during Ridl, McGuirk, and Watson's feel good swing. Reeves quoted Monk's "Bemsha Swing" and offered bouncing phrases for several bars. Ridl's chordal slaps filled gaps between busy single note sallies. Accompanied by McGuirk, Watson executed long Elvin-ish rumbles, briefly shoved everything else aside with a rock hard bass drum, and integrated some brittle hi-hat sticking. Reeves and Perry brought things to a close by playing off one another over a vamp. They engaged in a busy overlapping conversation before Reeves suggested a riff-like melody. Going in different directions, they gradually slowed down and eventually faded into silence.