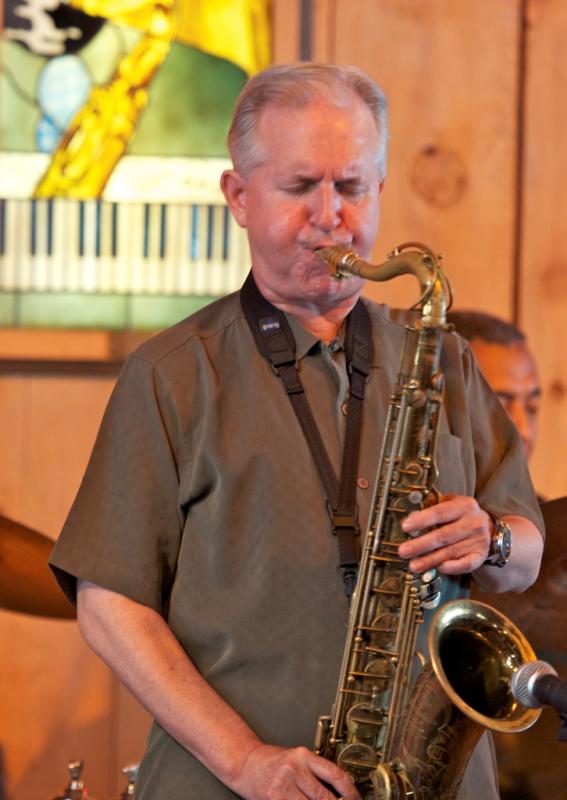 The Douglas Beach House was honored with the appearance of tenor saxophonist Scott Hamilton and pianist Larry Vuckovich's quintet— a stellar band comprised of some of the best in jazz, including the great Paul Keller (bass), impeccably precise Chuck McPherson (drums) and Noel Jewkes (saxophones) tenor saxophone, and the Jackie Ryan vocals). Guest artist Hamilton traveled from Italy especially to perform at Vuckovich's release concerts for his latest CD, Somethin' Special (Tetrachord, 2011). Hamilton and the quintet toured after the recording sessions, and the Douglas Beach House was their final stop—precisely the way to hear these fine musicians, as they'd already warmed up and were comfortable with both their chops and the tunes. Hamilton has played the Beach House several times in the past, on this occasion drawing a full house, with standing room only.

Hamilton is not necessarily known for playing a hard bop style of jazz, but in this concert he played it as though that's all he knew. As the concert moved forward, he slipped down into some smoky lower registers; later, he fluidly shifted into dreamy romance; and elsewhere, he blew a breathy horn. Warm and passionate, punchy and vibrant, Vuckovich's stellar band took the audience on a journey through varying terrains. It all resulted in a beautiful afternoon of stunning jazz.

From the opening "Sunday," it was clear that we were being taken back into the foundations of hard bop, and it was a refreshing reminder of how warm and sensual it can be. At the same time, the quintet moved across several styles, with the second tune occasionally possessing a bossa nova feel. Keller is unique in that he doesn't just pluck the strings; instead, he makes it feel as though his bass is talking, adding depth and breadth to his instrument. Keller and McPherson worked together with punchy episodes, dancing back and forth and playing off of one another. Vuckovich laid into the piano with a smooth, certain approach that added to the music's overall sense and feeling.

With the start of the CD's title tune, Jewkes joined the band, opening it in duet with Hamilton. Several bars into the piece, Vuckovich, McPherson and Keller joined in, adding punch behind the two saxophonists. Keller snapped his bass strings and made it sing; it was magic like this that produced surprises here and there, both in this piece and throughout the performance. McPherson is a classic jazz drummer who knows intuitively when to lay back and work beneath the rest of the instruments, and when to come out with his own voice. His masterful use of brushes added a dimension to the band that very few drummers understand.

To the delight of the audience, vocalist Jackie Ryan was warmly welcomed to the stage with the fifth song of the set. Ryan possesses a breathy, soulful flavor; she has that jazz voice. With "That Old Black Magic," Hamilton and Jewkes called back and forth to one another, as Ryan belted out Johnny Mercer's lyrics. Her gestures gave an added breadth to the performance, her hands and body adding to the scope of the tune. She put 100% of herself into every song she sang.

On the second set closer, the masterful "How Long Blues," Ryan engaged the audience with a sung refrain and a powerful dose of handclapping in time with the music. She belted out the lyrics while Vuckovich came on strong on his Steinway Grand, the tempo moving up into a crescendo, with Hamilton and Jewkes honking back and forth to each other. With that, the evening closed with long, sustained applause from the Beach House's sophisticated audience. Cries for more rose, and in the end, Vuckovich, Hamilton and McPherson wrapped up the evening with an encore of "Tenderly."