By GREG SIMMONS
December 7, 2012
Sign in to view read count 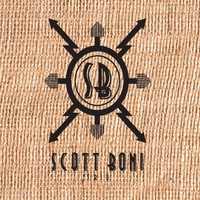 Washington, Pennsylvania is no hot spot for jazz music. With one possible exception (Al & Reuben's Restaurant), you are more likely to hear the latest hits from Brad Paisley or Carrie Underwood; no, let's face it, you are more likely to hear dead silence than jazz in almost any establishment in or around this small city just a few miles from the West Virginia border.

It's heartening, then, to hear a good jazz album from Washington, PA native and alto saxophonist Scott Boni. His first release under his own name in over a decade, this eponymous trio recording features the nowhere-to-hide horn, bass and drums lineup. The music has a relaxed feel, and the songs—all composed or adapted by Boni—have diverse influences including a few classical masters. It's a credit to Boni that despite such far-flung sources, the songs hang together really well to make a remarkably coherent record.

The opening "Miss Iowa" sets the temperate pace for the entire record, initiating with the record's most traditional melody. Improvisation quickly takes over, with Boni running over the tune in an extended but tasteful manner. Bassist Mark Zaleski—who played with Boni on drummer The George Lernis Jazz Quartet' Shapes of Nature (Self Produced, 2011)—also takes a healthy turn, sustaining the unhurried forward impulse. In places, like "For a Friend," the trio abandons defined melody almost entirely in favor of straight improvisation. But, for the most part, these tracks feature distinct, well-structured, articulated statements.

Boni possesses a smooth, almost creamy intonation with very little vibrato, leaving his overall sound a little on the cool side. Melody is his primary means of improvisational expression. This is not an album of explosive theatrics, which is refreshing when many of his contemporaries pack their recordings with the complexity of a physics equation. While Zaleski takes regular solo turns, drummer Mike Connors, who keeps intricate but subtly well integrated time, doesn't take a solo until the very last track. Boni was clearly not interested in stuffing this record with elaborate rococo personal extravagance. He nicely incorporates the space around his notes in a manner that would be lost on Art Tatum.

The most urgent sounding piece on the date is "Glass," which Boni modeled on "Award Montage" from composer Philip Glass' third string quartet, and even here "urgent" is a relative term. The moderate pace of the record is unusually consistent, making for an album that is both musically worthwhile of attention and accessibly enjoyable.

The Scott Boni Trio isn't a record that will jump up, grab by the lapels and shake vigorously. But it will reward careful listening with great writing, cool and sweet improvisations, and relaxed groove. It's worth hearing as an example of the good things that can happen when musicians say just enough to get the message across without getting carried away with themselves. Nicely done.