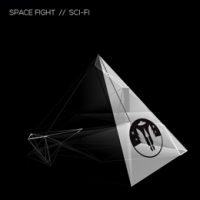 Question: what inspires a band called Space F!ght to create a recording called Sci-Fi? Answer: the works of classic science fiction writers such as Isaac Asimov. Question: will such inspirations result in music that's worth listening to, music that excites, that bears repeated listening, that's enjoyable? Answer: yes.

Radek Rudnicki, Space F!ght's leader, composer and driving force, holds a PhD in digital composition from York University and has collaborated musically with NASA's Goddard Institute for Space Studies and the Stockholm Environment Institute. This might suggest a rather worthy and academic approach to music-making, but Rudnicki has soul and a faith in the power of sci-fi texts as song lyrics. The music on Sci-Fi is imaginative and engaging—just like the best of the literary genre that inspired it.

While each of the tracks on Sci-Fi is built on a foundation of electronic effects, these effects are often suggestive of an old analog recording—fuzzy, scratchy and warm. James Mainwaring's tenor sax, Matt Postle's trumpet and Tom Adams' guitar bring jazz and rock perspectives to the proceedings. Vocalist Anna Edgington brings something else.

Mainwaring—from Roller Trio—adds a deep, rich, tenor sound to the slow-yet-cheery "Starlight"; Adams' bright, sweeping, electric guitar floats above Rudnicki's percussive effects on "Stardust" and "Bass Solo" (which is neither very bass-y nor a solo); Mainwaring, Adams and Postle come together to build "Monster"'s edgy atmosphere. Edgington's "something else" is a distinctive English quirkiness. Her precise, clear, diction couples with a seemingly effortless sensuality, whether she's reciting the words of Philip K Dick (as she does on "The Name") or asking in mock-innocence "Can you play it, Monster?" ("Monster," quoting Asimov).

Space F!ght's juxtaposition of English vocal purity with a mix of electric and acoustic instrumentation harks back to two of the finest songs from the UK's post-punk era of the late-70s and early-80s: the Flying Lizards' take on Barrett Strong's "Money" (a UK Top 40 hit) and the more obscure but no less delightful "There Goes Concorde Again" from ...And The Native Hipsters. Both songs are charming, left-field and a little bit odd—a winning combination. Those same qualities come together on Sci-Fi—an album for those who love the slightly strange.