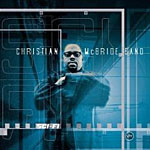 Undeniably a great technician and one of the best jazz bassists of his generation, Christian McBride is so much in demand that he might safely be considered a Paul Chambers for the new millennium. But like many talented men who find themselves viable artists in the role of sidemen, McBride has been inconsistent in his efforts as the person in charge. Sci-Fi, his fourth set for Verve as a leader, is still meandering in spots but has a creative edge to it that finds McBride earning points in the resourcefulness category.

The most captivating moments here come with McBride's reworking of such pop tunes as Steely Dan's "Aja" and Sting's "Walking on the Moon," the former taking pieces of the original form for its light swing and the latter possessing a brooding and languorous quality complete with James Carter's moody bass clarinet. A salute to bass masters Jaco Pastorius and Stanley Clarke makes for more highlights, with Pastorius" "Havona" turning into a heady romp, while Clarke's beautiful waltz "Butterfly Dreams" comes on with an impressive bit of bowed work from McBride.

Mixing electric and acoustic elements, guitarist David Gilmore figures prominently into the mix. The other special guests are far less integral to the success of the whole, yet Hancock tears it up on "Xerxes." McBride's own writing is not as strong as his arranging, yet the overall mood hangs together and the presentation is somewhat in the vein of a modern update on early '70s fusion (the track "Via Mwandishi" should give the astute reader a signpost in the general direction). So even though the theme may lead a bit on the side of kitsch, Sci-Fi packs a visceral punch that's worth a listen.