By DAN MCCLENAGHAN
October 24, 2017
Sign in to view read count 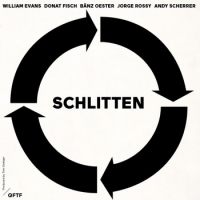 Schlitten got his start working the music business with several of the small but prestigious record companies—Muse and Prestige, among others—before he created his own label with Xanadu Records. His approach was straightforward—bring the intuitive, top-level musicians into the studio and let them have at it. Tom Gstelger, the man behind this Schlitten mission, used the same approach, asking the members of this sax-and-a-rhythm-section quartet (a quintet on two Monk tunes) to bring in some songs. No rehearsals. Call 'em out and let's play.

The oldest of the selections: the 1925-penned "I Want to Be Happy." The newest: Thelonious Monk's "Bemsha Swing," from 1952. So, it's tradition time, in the best sense of the word. The group has a relaxed fluidity, a complete ease of expression, starting with Fats Waller's "Jitterbug Waltz" through the Jerome Kern/P.G. Wodehouse jewel, "Bill."

Recorded without headphones, the players in one room, in a circle facing each other, the "sound" is a factor in the success of the set. Warm, spontaneous, interactively virtuosic, it could be mistaken for one of the late-50s/early-60s Prestige Records sessions. The two Thelonious Monk tunes, "Misterioso" and "Bemsha Swing," serve as a highlights, with an additional tenor sax—Andy Scherrer—mixed into the group, for some wandering conversations with alto/tenor saxophonist Donat Fisch.

Jitterbug Waltz; Sweet Lorraine; I'm Getting Sentimental Over You; Day Dream; Misterioso; Bemsha Swing; I Want To Be Happy; Bill.