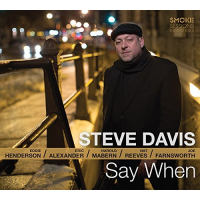 The winds of change have actively sought to change the jazz vernacular of the 21st century. Fueled in large part by the media, it seems that the darlings of the current set have opted for a broader definition of the music. Key elements such as melody and a prominent swing feel are often looked upon as "old hat" by the so-called hipper crowd. Some of this new music is vital, but much of it is inconsequential, further splintering the jazz audience of which their numbers are increasingly fewer by the day.

This fact alone makes albums such as Say When a refreshing change of pace, as we get to hear state of the art music performed by some of New York's finest musicians. Add to that the fact that this album pays homage to jazz legend J.J. Johnson and we have yet another reason to celebrate. Sadly, a few decades or so ago these types of albums were the norm. Davis himself established a great catalog of solo recordings while also playing a major role in the band One For All. Lately, however, it seems that opportunities for artists of Davis' caliber have dwindled and again we have changing tastes and the declining record industry to blame.

Although Davis states that this tribute to Johnson was in the pipeline for many years, he just recently decided its time had come. Although eleven numbers might seem a bit on the lengthy side, there is not a wasted note here. Featuring six Johnson originals, the diverse program is made up of material associated with the be-bop trombonist and Davis has the experience and knowledge to honor his mentor, while expressing his own creative muse.

Aiding Davis in his efforts are regular associates Eric Alexander, Harold Mabern, Nat Reeves, and Joe Farnsworth. These gentlemen have played countless gigs together and their level of musical communication is quite highly developed. The surprise here is the addition of Eddie Henderson on trumpet. His muted horn is heard to great advantage on "Shortcake," where he weaves lucid melodies of great architecture. On Mabern's original, "Mr. Johnson," Alexander utilizes one of his signature trills to wrap up his solo, which Henderson then picks up on for his own opening gambit.

Davis tastefully uses the three horns in his arrangements, his background lines discreetly supporting the soloists. This can be heard to full advantage on "Say When" and "Pinnacles." Mabern's block chords and soulful touch set the tone for such swingers as "What Is This Thing Called Love?" and "Kenya." Even Reeves gets a chance in the spotlight, taking some wonderful choruses on "Lament" and "Shutterbug." As for Joe Farnsworth, he again proves why he is one of the most musical drummers on the scene. His own solo statements are filled with variety and his sound is an icon of what a jazz drum set should sound like.

Although this is Davis' record, he never showboats or takes the lion's share of the solo space. Nonetheless, his nimble horn lines and storytelling abilities are on full display, especially on the lovely ballad features "Lament" and "There Will Never Be Another You." Inspired by hearing Johnson's treatment of the old warhorse "When the Saints Go Marching In," Davis wraps up the disc with a definitely clever device. With the rhythm section in one key vamping on a three note riff, he delivers the familiar melody in another key. It's a great send off to one of the trombonist's best efforts to date.

Pinnacles;What Is This Thing Called Love; Shortcake; Mr. Johnson; Lament; Say When; Kenya; Shutterbug; Village Blues; There Will Never Be Another You; When the Saints Go Marching In.