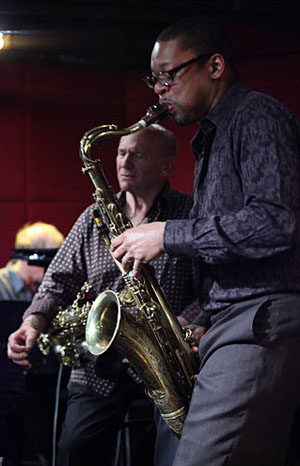 For Dave Liebman, it was the orange spines. For others, it was the laminated, emblematic covers with gatefolds. For everyone, Impulse! was the record label that best committed to vinyl the golden age of jazz: a fertile crescent between the late '50s and early '70s that simultaneously showcased all the branches of the jazz evolutionary tree, from Satchmo to Duke to Coltrane. To commemorate the 50 years since the birth of Impulse!, the Jazz Standard hosted a five-night run of album celebrations kicked off, fittingly, by John Coltrane's debut Impulse! release, Africa/Brass (Impulse!, 1961).

Fronting the quintet for the second set were Dave Liebman and Ravi Coltrane, two disparate descendants of the Coltrane canon whose mutual veneration was evident. A teenage member of the Coltrane cult, Liebman routinely saw the iconic saxophonist play the Village Vanguard in the early 60s and cites these revelatory evening sets as his model, past and present. Contrast this with Ravi Coltrane, the 2-year-old son John Coltrane left upon his 1967 death, who only connected with his father's music in high school after the loss of his older brother in a traffic accident had left him devastated and directionless. Initially a coping mechanism, the recordings soon compelled him to jazz and the saxophone. On "Blues Minor," the second set's opener, the tenor saxophone exchanges seemed to capture the distinct ways in which the front men honor the music: the youthful, yet professorial nature of Liebman, and the impassioned and searing runs of Coltrane.

Rounding out the quintet were Phil Markowitz on piano, Cecil McBee on bass and Billy Hart on drums. The elder yet indefatigable statesmen of the group, McBee, 75, and Hart, 70, cooked throughout, perhaps best evident in the set closer, a hauntingly intense version of "Africa." Bowing and slapping his way to an extended opening solo, McBee evoked the droning, water drum-like sound that had captivated Coltrane during the Africa/Brass period and beyond. Liebman added chilling wooden flute work—reminiscent of the flute Eric Dolphy lent to "Olé"—and together, this catapulted willing audience members from a Manhattan basement to the souqs and sun-baked Saharan sand.

As a quintet performance of an album that featured a 15-piece brass band, certain accoutrements were expectedly absent. "Song of the Underground Railroad" and "Greensleeves" lacked their recorded grandeur and extended harmonization. But the intimacy of this stripped-down interpretation afforded some interesting moments of band interplay. During several breaks, Coltrane playfully egged on Hart; all appeared entranced by the range and virtuosity of McBee's upright bass.

Beyond its importance to the fresh-faced Impulse!, Africa/Brass is a powerful transitional statement that encapsulates who Coltrane had been, who he was and who he would be. The mathematical penchant that had inspired tunes like "Giant Steps" and "Countdown" was beginning to evolve, prodded along by his burgeoning appetite for the music of other cultures. The title track, "Africa," recorded just two days before "Olé," harkens to the Indian, African and Middle Eastern scales and figures that populated his notebooks in these years. A feverish collector of records by Ravi Shankar (the inspiration for his son's name) long before the highly publicized forays of George Harrison and crew, Coltrane's Village Vanguard dates in late 1961 cement the arrival of this culturally-inflected, exploratory phase. In just a few years, Coltrane, then a self- possessed explorer of emotions and music, would hire Pharoah Sanders and the level of hysteria would rise. Perhaps befitting the spiritually-driven Coltrane, his musical evolution had gone full-circle: he ascended structure, reached the pinnacle and then razed it all into a biotic soup of sound.

Fiftieth anniversary shows, seminal record re-issues or his canonization by Saint John Coltrane Church in San Francisco—continued tributes to John Coltrane and his music evidence his relevance has only grown since his passing.