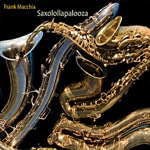 As John Cleese used to say on the Monty Python television series, "And now for something completely different." Of course, one can usually expect something completely different from free-thinking Frank Macchia, and this CD is no exception to the rule. Once upon a time, Macchia writes, he bought a bass saxophone and came up with the idea of recording half a dozen saxophones, from soprano to bass, accompanied only by drums. He wrote a number of charts and even recorded demos on which he overdubbed the saxophone parts. But Macchia eventually shelved the plan, as what he "always dreamed of was to get a great section of saxophonists to play [the] material."

While there are solos on every number (as able as one could wish), the emphasis is on the ensemble and Macchia's sophisticated and exotic charts, which wrest as much color and dynamics as one could envision from a six-member reed section. As for Erskine, he performs his duties as "rhythm section" with characteristic style and poise, moving easily from samba to funk, swing to ballad. Tempos are often challenging but Macchia seldom strays far from the basic melody.

Those who have heard Macchia on record before should be well-prepared to expect the unexpected. Those who haven't may rest assured that his musicality and that of his teammates is beyond reproach, and that Saxolollapalooza is brisk and refreshing from end to end.