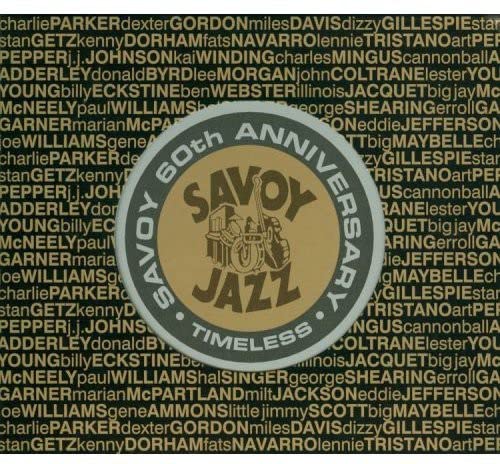 Continuing their 60th anniversary of Savoy, Savoy Jazz has released a double CD overview of the label. While still having a catalogue of great jazz recordings that stand the test of time, Savoy has other reasons to be proud on its 60th birthday. They are the only label that can claim that they recorded first as bandleaders such legendary figures as Charlie Parker, Miles Davis, Dexter Gordon, Stan Getz, Fats Navarro and J.J. Johnson.

In addition to recordings by each of the above, Savoy pulls out the best from other artists such as Dizzy Gillespie’s “The Champ, parts I and II,” Charles Mingus’ “Tea for Two,” Lester Young’s infectious “Jump, Lester, Jump,” and the classic George Shearing recording of “Moon over Miami.”

What is particularly enjoyable about this collection is not just the breath of recordings from the labels vault, but how well the material blends together, a credit to the albums compiler, Billy Vera. I only have two minor complaints with and otherwise flawless package. First, it would serve the importance of this record to have a more detailed and longer liner notes about the history of the label and each of the recordings that appear on the collection. The second has to do with my pleasant surprise with the Red Norvo collection re-issued earlier. It would have been nice (both musically and as a marketing strategy for that album) to include a track from Norvo. Other than that, everything else is just the way you would want your Savoy collection to appear.

This collection is yet another home run (though two run homer) from the Savoy re-issue anniversary celebration.