By HRAYR ATTARIAN
August 11, 2011
Sign in to view read count
The year 2011 is proving to be a fruitful one for Japanese composer and improviser Satoko Fujii. In addition to a world tour, she has released three albums (all on June 21) on her own Libra record label, each in a different setting and in the company of different musicians. Her only constant companion, through all three discs, is her husband and musical partner, trumpeter Natsuki Tamura. 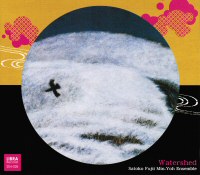 On Watershed, Fujii plays with her Min Yoh Quartet, and features Japanese folk melodies and originals in the spirit of these traditional songs. Most have water-related themes, such as the aptly titled "Cascade," where Fujii's strumming of the piano's innards mimicks the sound of a small waterfall. Although Fujii's thesis, that music is constantly around us in the sounds of everyday life, is apparent, the music is never cacophonous. On the contrary, it approaches the mellifluous. The growling trombone echoes Tamura's chanting on "Limestone Cave," under the rain drops of Fujii's plucked piano strings. The alternating improvised duets on "Whitewater," initially between Fujii's piano and Curtis Hasselbring trombone, and later the freer and more angular dialogue between Tamura and Andrea Perkins' accordion, are vaguely reminiscent of Igor Stravinsky's "Rite of Spring."

A Zen-like simplicity permeates these compositions and arrangements, that are fleshed out by complex improvisations such as the multifaceted and tightly woven group improv on the old sea shanty "Soranbushi." They are also often theatrical, such as the chiming of the piano in the wind section of the horns on the lullaby "Takeda No Komoriuta," which is followed by the trumpet's sweet song, as the piano gently rocks and the accordion softly breaths, before taking over the melody like one parent taking over from another while rocking a child to sleep. 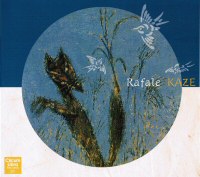 If simplicity, albeit deceptive simplicity, is the main characteristic of Watershed, then compositional intricacy and improvisational complexity is that of Rafale, recorded by Fujii with her Kaze quartet.

The lines between composition and improvisation are blurred, as on the ominous sounding "Anagramme." The piece exhibits Fujii's minimalistic piano enhanced by the dueling trumpets of Tamura and Christian Pruvost and the incessant, yet never boring, percussion by the composer of the piece, Peter Orins, before it climaxes with a cinematic and melodic conclusion.

Some of themes explored on Watershed are evident here, as well as, on "Noise Chopin," cross pollination with western classical music. The multilayered piece builds like a nocturne, but instead of the quiet melancholy of Chopin's nights, this is full of the beats of a modern city. In a nod to Chopin, Fujii quotes a few bars of his "Marche Funebre." The unfettered exploration of noise and its role in music is a case put forth on "Blaze," where the quartet goes back and forth between stream of consciousness, atonal and arrhythmic improvisations, and harmonious group play.

Lastly, one of Fujii's originals, "The Thaw," appears on both discs. On Watershed, it opens with Fujii plucking the strings of the piano by hand and then starting a hypnotic lullaby with Perkins' sparse accordion "squeaks" punctuatimg the melody. On Rafale, Orin's long polyphonic drum solo opens the piece with an earthier and more resonant sound. 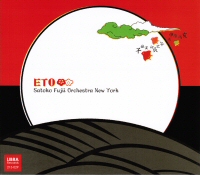 Fujii's Orchestra New York is a big band with an intimate, small ensemble sound. On Eto, the title piece is a fourteen-part composition, with each short movement named after one of the animals of the Chinese Zodiac. It features a soloist sketching a portrait of the animal in a few brief, colorful strokes of their instrument. Saxophonist Chris Speed's mouthpiece solo scurries fast up the scales in a seemingly chaotic fashion on "Rat," while Ellery Eskelin's tenor growls on "Tiger." Curtis Hasselbring roars and slithers through an imaginative trombone solo that evokes the only mythical animal in the suite.

This "visual" style is apparent on the other three tracks as well. The Middle Eastern "Stroll" is like a colorful musical illumination depicting a leisurely walk with a poet through one of Persia's fabled ancient gardens, with trumpeter Herb Robertson, Speed and Hasselbring mimicking the twittering of the birds. The hectic "Pressure Cooker" invokes the din of a modern metropolis, with occasional interludes by trombonist Joe Fiedler and trumpeter Frank London standing out, as the musical camera focuses on an individual before panning out again.

With this trio of recordings Satoko Fujii has yet again proven that she is one of the most versatile and imaginative composers and improvisers working today. Her music is destined to weather the test of time.