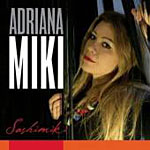 The spry and sensuous voice of the Brazilian Adriana Miki is beautifully showcased on her debut album, Sashimiki, produced by her bass-playing partner in this project, Sérgio Crestana. Delivering an exquisitely chosen, albeit short, program, Miki emerges with soft grandeur as Astrud Gilberto once did when she voiced the songs of her then husband, Joao Gilberto. Miki's voice is laden with elemental saudade and shows that Brazil's tradition maintains its long line of emotive ingenuity that recalls the near-mystical bliss of voices such as Elis Regina, Gal Costa, Maria Bethania, Rosa Passos, Ithamara Koorax, Nara Leão, Luciana Souza, Monica Salmaso and others. However, Miki sings in in a bluesier manner, couching even joy in the bittersweet pain of bringing that emotion to life.

When Adriana Miki chooses to bare her soul, seduction is inevitable. The inner ear is so drawn into her world that her perception of the characters and situations becomes reality. Her sadness is the audience's and there can be no way out other than being sucked into her world. Her insights into the music are deep and glorious. The subtle shades of her elegiac chart "Cai em Mim" are captivating and real as the tears she may have shed along the way. Miki brings a refreshing turn to the great Moacir Santos' English chart "April Child," rendered here in the Portuguese adaptation by the wonderful sambista Nei Lopes as "Maracatu Nação do Amor."

In Milton Nascimento's superb baiao "Vera Cruz," Miki draws her audience in with a visual rendering set in a blue and minor key, bringing visions of crucifixion to life. The sultry debilitation of the north wind is so real in "Vento Norte" that the mind's eye begins to tear up, despite the joy and swirling shuffle of its seductive maracatu rhythm. "Nascente," written by Brazilian pianist and composer Flavio Venturini, is delivered in a spare and beautiful manner with Miki's plaintive voice backed up only by Carlos "Bisna&#231a" Lopes' accordion. It is this elemental spark that brings stellar visions of life floating before the eye. The sublime nature of the ballad "Rojo y Blanco" is unforgettable as much for Paulo Barros' piano solo as it is for Miki's nuanced inflections.

If Adriana Miki can deliver a debut this powerful, who knows what can come next? Perhaps she and Crestana envision a larger ensemble in support of her superb voice. Such speculation is prompted by the fact that Miki's world is now her oyster. After all, who can tell what gems will adorn the world of music when the dust of "Vento Norte" settles around her?